Money is always talked about in fashion, but in specific contexts. How much does that cost? How much did they make? By what percentage are there sales up? How much is a stock? These questions, I assume, are asked on the regular. Fashion designers, however, don’t always comment on economics in their collections. They talk about economic constraints—Richard Malone made a collection in his childhood bedroom, Molly Goddard in her mom’s spare room. Often, designers don’t channel this into their garments. Perhaps because of the hefty price tag associated with a piece of work.

Hussein Chalayan was looked to the country with the largest economy in Europe for his Fall 2016 collection: Germany. It is the third largest exporter in the world with 1.13 trillion euros in goods and services exported. The fashion industry, by comparison, is worth 1.2 trillion dollars—which equates to approximately €1.07 trillion. Northwest Europe inspired the collection named “Teutonic”, which denotes to the characteristics of Germans. The speed and efficiency of the German auto industry, and a car zooming down the tree-lined asphalt of the autobahn. The image of that, the one you’ve conjured in your mind, stems from German fairy tales. The brothers Grimm, Jacob and Wilhelm, haunted readers with their harshly depicted stories of Rapunzel, Cinderella, Little Briar-Rose, Snow White and other characters that have since been spoofed brilliantly by Disney. These odes to German culture represent the richer elements of things. Conversely, “the pressure of past events that took place in Europe”—World Wars aren’t explicitly states, presumably not to take away the romance that the collection tries to build—were referenced also. Military themes permeate the collection. They are hidden with large pleats.

High functionality, quasi-austereness, severe tailoring—three words correlating to German dressing—can all lead to a loss of character. This collection was intended to relieve that stress, with subtle reference to Berlin club culture. (Scantily-clad women and men hit the runway). However, sometimes it caught too caught up in the darkness and it forgot to have a sense of humour. Indeed, it did have a sense of humour; a top and trousers printed with a map of the autobahn, replacing destinations with words taken from fairy tales, the anatomy of a garment printed on dresses. 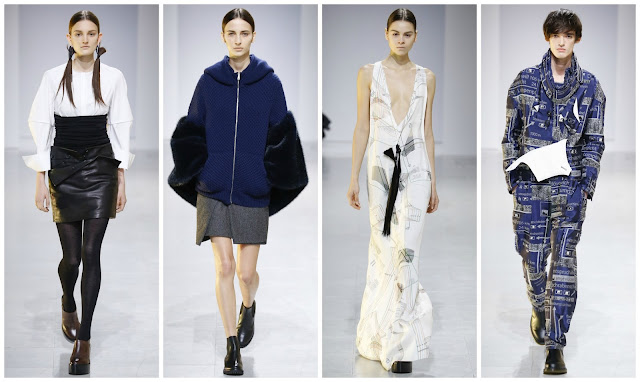