Fashion East selected four diverse, fledgeling labels for their Fall 2016 season. Over the next four months I’ll write an entry on each of them. To kickstart things I wanted to feature Caitlin Price. This is her last season with the initiative. That doesn’t translate to anything detrimental, at this moment in time. The South Londoner is a semi-finalist for the prestigious LVMH Prize. Previous winners, both London-based creatives, are Thomas Tait and Marques’Almeida. Both have reaped the rewards of the €300,000 prize. Even better is the invaluable industry mentorship. Jonathan Anderson, Karl Lagerfeld, Marc Jacobs, Nicolas Ghesquiére, Phoebe Philo, Humberto Leon, Carol Lim and Riccardo Tisci are all seated on the panel that will select a winner in June. For Caitlin to be a prizewinner would be another fantastic solidification that London is at the forefront of producing the best global talents.

Her aesthetic won’t be considered palatable to some. Her designs are sexy—ample skin is bared—and an exploration of her deep-rooted fascination with nightlife rituals. The “imitation and artificial luxury” is synonymous with clubwear. High and low-end fabrics are mixed to find that balance. Silks and polyester satins, mohairs and faux fur are combined in different pieces. In my city, nights out are an opportunity to where the highest heels and the shortest dresses. Quasi-glamourous cheap night outs with outfits from Primark and Topshop are very much real. Caitlin clearly notices this, and her daring take at refreshing the clothing category are definitely for the bad girls of the world. The original bad girl: Rihanna, for example. 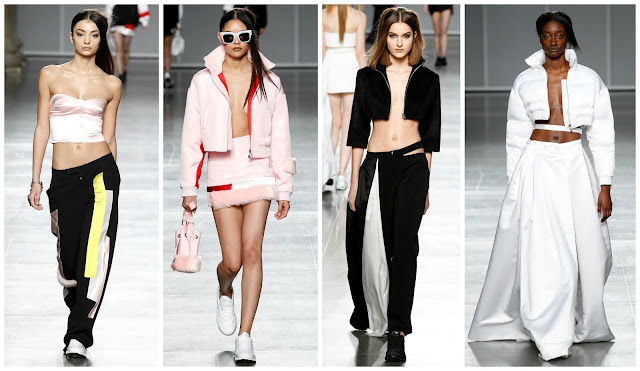 Centre-parted bouffant hairstyles seen on the runway extended imagery of the brash party girl on a night out. There was also cheek piercings. I immediately thought of Amanda Bynes breakdown, when she was photographed with diamond piercings. I found them quite horrible but they suited the 90s air and flair of the collection. Large sunglasses framed models’ faces, and Maria Francesca Pepe designed silver jewellery. The idea is to create “an abstracted take on a rite of passage 16th birthday gift.” The trek home after a night out was catered to with black or white trainers.

Speaking to one, anonymous, editor after the show, they said they were “tired” of the sportswear trend. To an extent I agreed—we are the becoming a sportswear-fatigued industry. There are redeeming qualities of Caitlin’s design process. She deconstructs formal evening wear, as well as the nightclub garb. She exercises a tasteful trashiness, a line she’s careful not to cross. There were cropped puffa jackets, bustiers, mini dresses and tracksuits in the collection. Those are recurring pieces in her collections. There was an introduction to faux fur and colour studies here. Those were the things to hold onto. Although we’ve seen a lot of this before there were the foundations of change, and you couldn’t not be charmed by that.