For a Michael Kors collection to truly enamour me, it needs to be of pristinely polished and with one or two points of vague excitement. Fall 2016 had me from the word go. Freja Beha opened in an open, double-breasted coat with ostrich feathered denims and pussy bow blouse. Slingback loafers and a chic bag were styled.

The points of interest in the this collection were the pops of vibrant hues. There were cable knit sweaters and fur coats in sky blue, apple green coats with fur sleeves and collar, and lilac, ostrich feather shorts. “An apple green coat can lift your spirits,” an Instagram caption on the Michael Kors page read. Subtracting these colours and you’d have a largely dull collection, save for two gold and silver dresses. The floral printed furs were reminiscent of Miuccia Prada’s Spring 2013 collection for her eponymous line. Anyone with basic fashion knowledge of the past four years will recognise them.

If tailored daywear wasn’t pickling your fancy—it could easily be read as a bored housewife from that 60s—the evening wear could sway you. Ine Neefs’ gold mini dress, conjoined with ringlets, was festooned with intricate floral embroidery. Vanessa Moody’s mini with a netted blouse and an ostrich feather skirt was belted at the waist with a grosgrain strap. A floor length verso could be worn to Le Bal des Débutantes at the Hôtel de Crillon. The audience was fixated upon a shimmering silver jewel-embrodiered dress and Greta Varlese’s glittering disco ball dress. You can see why: both were dazzling.

Michael Kors’ 60s inspired, WASPy designs are without fail this season, a statement I’m shocked to utter. With the swell averageness at New York Fashion Week, clothes that don’t offer much to the fashion conversation have to do a lot to stand out. However, Michael Kors joined a short list of designers that have done that. There’s a first for everything. 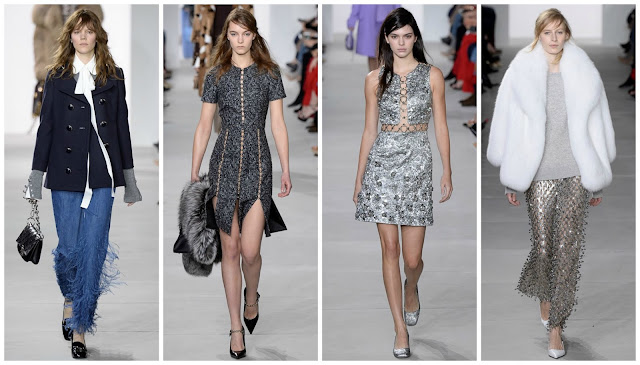 There was a time when I’d profess nothing but love for Josep Font’s Delpozo. Like Thom Browne, he has the ability to bring a Parisian, couture-like craftsmanship to New York. That couture-like craftsmanship wandered for the past couple of seasons. It didn’t diminish, it just strayed into Raf Simons’ Christian Dior courtyard. When NYFW would come around biannually I felt as if I was watching a Raf for Dior copyist imitate and poorly cover up his tracks. Delpozo’s Fall 2016 collection could be described as restorative. Font’s handwriting was visible and there wasn’t anything reminiscent of Raf's Dior.

Live music, as always, fixed itself at the end of the runway serenading the models who walked painstakingly slow as with couture tradition. There were oversized lantern sleeves, sunshine yellow and massively oversized coats. There was a lovely dress with pronounced hips that featured laser-cut floral embroidery.

During the live stream, closest to the models entryway there was a woman preoccupied by her phone. By the team she looked up the last model had just passed by. Font’s fairytale touches grew tiresome and I didn’t find myself entranced. Instead I was taking an afternoon nap. Expertly made but this wasn’t exciting. 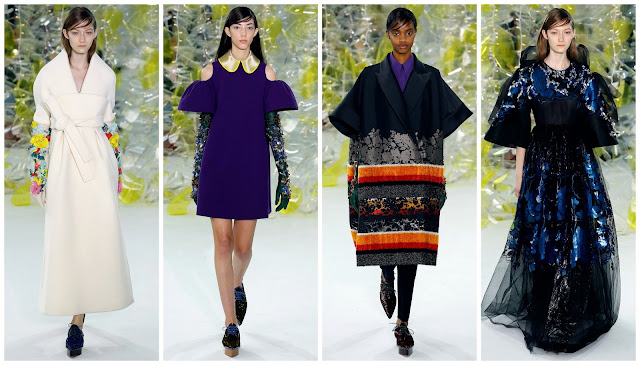 New York’s pragmatism is getting the better of itself. Brands like Rodarte, Eckhaus Latta, Babyghost, Gypsy Sport and a few others offer a gasp of fresh air in between the mediocre, average presentations that are shown on the hour, every hour. The general consensus is that there is a total lack of experimentation. Surprisingly, Jason Wu’s role as artistic director of Boss Women hasn’t been a game played that safe. Throughout his role there, his collections have become progressively more entertaining and striking.

The exquisite cuts in the collection were naturally smart and sharp, a notion that carries through from the breadwinner: Boss menswear. Mica Arganaraz’ black top with an asymmetric peplum was enriched with a sheer panel, a camel stripe and floral embroidery. Paired with tapered trousers and accessorised with ankle boots, the addition of the top indicates a workwear revolution. A revolution of this kind is not only welcome, but long overdue. Chevron lace and hand-frayed chiffon were fabric experiments in this collection. What they formed was kinetic evening wear in bright colours. Injecting some bright colours, pumpkin and magenta appeared in the form of coats and a beautiful beaded dress (one of the last looks).

Jason Wu’s satisfying Boss Women line up is certainly for boss women looking to enhance their wardrobes with timeless, well-constructed garments that will look amazing now and in ten years. The clothes were beautifully cut, a second nature to those at Boss. Wu’s designs for Boss Women, I might even go as fa as saying, are much more potent than those at his eponymous label. 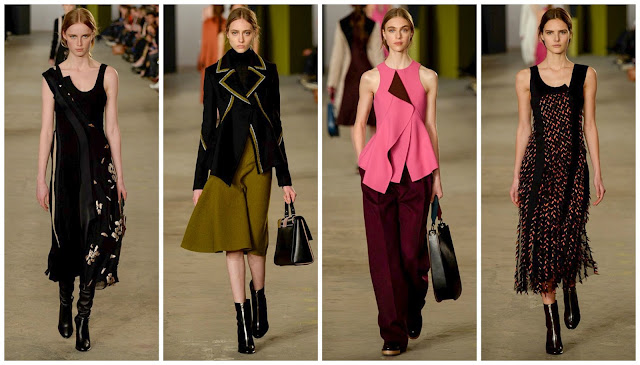 After a respectful ode to 1980s DKNY last season, Public School’s Dao-Yi Chow and Maxwell Osborne decided to avert their eyes from classy street wear in favour for their own DNA. Thankfully it didn’t smother the entire collection which still had some favourable moments. Bad girl attitudes were at an all time high. The soundtrack rang with a sonic thump and raucous teenage girls. The models had waves in their hair and with bratty resemblance, some of it was haphazardly tied.

Adwoa Aboah’s pin stripe suit went from a banker on Wall Street to a disgruntled teenager playing with their father’s work cloth surplus. Slashed, with open hemlines, to become a crop top of sorts, the blazer was reappropriated into something cool and fresh. More 90s bad girl chic came in the form of a reworked shirt, famously a DKNY signature. Leather and silk worked together for a luxurious street wear mix. Damaris Goddrie wore undone plaid dungarees, a silk shirt and a fur and pinstripe coat. A healthy mix of everything. The boys’ true talents lie riffing their street wear aesthetic with that of DKNY’s twenty-something, workwear charm.

What wasn’t fresh in this collection was the blatantly obvious intended points of sale. 90s obsessions with logo tees are so blasé. A top that says “Insert Logo Here”, or “Okay.Logo.New.gng”. Unoriginality isn’t something that DKNY deserves. Especially when it’s as dully presented as this.

The above three statements were branded on saleable black sweaters. Petulant statement for petulant looking teen models. But the bad attitude is credit to the designers. Poking fun at fashion critics, presumably, there’s a whole lot of irony in those lines because many New York designers have done nothing but perpetuate the statements this week. 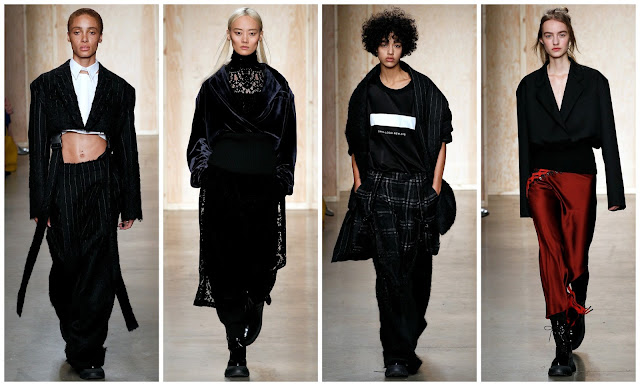 There was time a few years when the show that I looked forward to most during NYFW was Marchesa. Yes, Georgia Chapman and Keren Craig’s excess of bejewelling, bedazzling, tulle, embellishment and embroidery was the most satisfactory moment of the week. That’s since changed—Proenza Schouler, Victoria Beckham and Calvin Klein are now my most sought after. The magical touch that the duo behind Marchesa have began to dissipate a number of seasons ago. I switched off not long after. For Fall, the duo threw in some pieces that were resemblant of Marchesa of yore.

A chiffon and tulle halter neck gown with a keyhole cutout featured intricate rose petal embroidery. Any stylist without an Oscar dress for their client will be clamouring for this one. A flapper style gold-embroidered mini dress featured feather plumes. Another dress that reminded me of the olden days was a salmon pink, architecturally-sculptured dress with embellished florals bursting from the waist and bodice.

The collection was inspired by John Singer Sargent. The “regal” women of his paintings were embodied by Chapman and Craig in their design. The 20s frilliness, bulging shoulders and swaths of tulle all hit the runway. When the designers used to show at a more intimate hotel ballroom setting the clothes flourished. The official NYFW venue at Moynihan Station doesn’t do these clothes justice, the spotlight-lit catwalk needed tone swapped for the light-drenched grandiose settings at the St Regis.


I’m open to change in fashion. After all it is an ever-evolving industry. Disliking work from designers you love is always difficult. When Chapman and Craig, two women I have huge respect for, give us a glimpse of the unabashed grandeur from a couple of years ago (their best years) but bracketed by the new Marchesa, I confusedly shake my head. The new Marchesa aesthetic looks cheaper. Their expertise is in making princess dresses—the new aesthetic looks like a debutante, never to be seated on the throne. 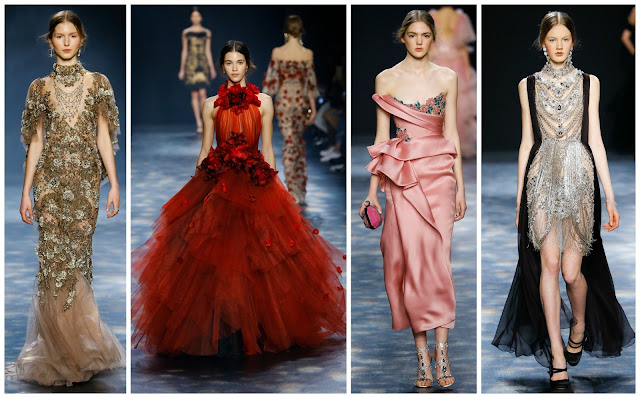 Ralph Lauren opened the closing day of New York Fashion Week. The stylish man displayed what fashionable women, with a lot of money, from upstate New York will be wearing this winter. In swaths of cashmere and silk, chiffon and wool, those women will be effortlessly chic in the colder months. The collection was slightly Western meets uptown and posh, equestrian. The result was either well executed or uninspired. To begin with the latter, Karlie Kloss’ opening cardigan, trousers and shirt combo is as old as the hills. A few horse riding blazers, checkered jackets, turtlenecks and midi-length skirts too. The only attempt to mask their banality was the colours. A chocolate brown, for example, looked great on Waleska Gorczevski’s skirt.

The former featured enjoyable Edwardian tinges. A double breasted, man’s blazer in a printed jacquard with black lapels was paired with acid wash denims and a shirt and tie. Much more put together than its predecessor: a horrible acid wash jean, large belt, velvet jacket and flouncy, ruffled blouse look. There were printed trousers, high neck blouses with floating layers of chiffon, bejewelled cuffs. Those were nice.

The evening gowns were the most special part of this collection for me. Starting with Lineisy Montero’s slinky black gown, a one-shouldered blue velvet dress with a side slit. A strapless purple velvet gown was stunning. I need to see it on the red carpet on Oscar night.


Ralph Lauren’s tried and tested formula delivers exceptionally—for his staunch customer base. The rest of us just watch models traipse back and forth on the catwalk, bored and begging for something substantial. The non-believers, like myself, find fulfilment elsewhere. 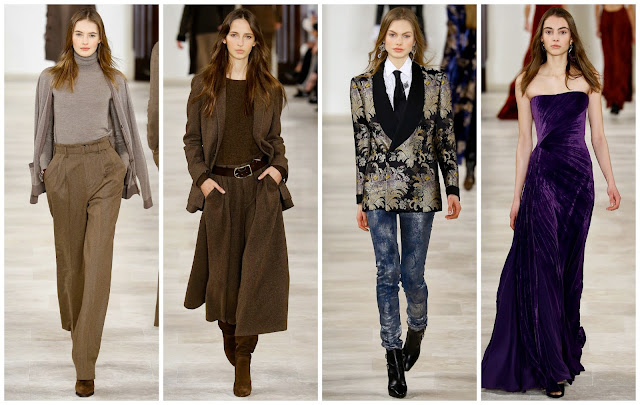 My reflections on New York Fashion Week will be posted tomorrow morning. In the 1000+ word piece I share my thoughts on the entire week. Over the next couple of months there will be more content from New York Fashion Week. Expect reviews from Rodarte, Calvin Klein Collection, Proenza Schouler, the 2015 CFDA/Vogue Fashion Fund winners—Jonathan Simkhai, Brother Vellies and Gypsy Sport—amongst others. London Fashion Week commences tomorrow morning and I will be reporting from there over the next few days. I’ll try to post day in the life style posts from my time there.
Posted by Paulidoodles at 1:01 PM