Mary-Kate and Ashley Olsen kicked off day 6 of New York Fashion Week in their West Village studio. The former child actors turned bonafide fashion entrepreneurs’ label The Row is a cult favourite among stylish and elegant women everywhere. There intimate and low-key presentation saw attendees seated on minimalist interiors and the two ladies behind it all perched quietly on the floor, a morning coffee in hand. A rare appearance, show-goers were honoured by their presence, especially given their gracious seating. This brand has been performing wonderfully. A visit to Net-a-Porter shows that many of the pieces available sell out or there is only a limited amount left. This label facilitates a high end customer with a penchant for classic pieces that are luxuriously, tailored superbly and look and feel great. Comfort is another key point. A mere glance ensures it.

After a brief decampment to Paris last season, everything was back to New York for fall. The offering is pretty much what you’d expect. Luxe fabrics in classic shapes: long overcoats, work trousers, slip dresses and sweaters. Expertly cut, the clothes came in earthy tones from a rusty brown to black to a soft caramel hue. The wildest of the bunch was an astrakhan coat in a subtle lilac. Sublime. There was also a bottle green velvet sling bag. You didn’t know that you wanted it until you saw it. I expect to here women uttering that statement a lot this fall. 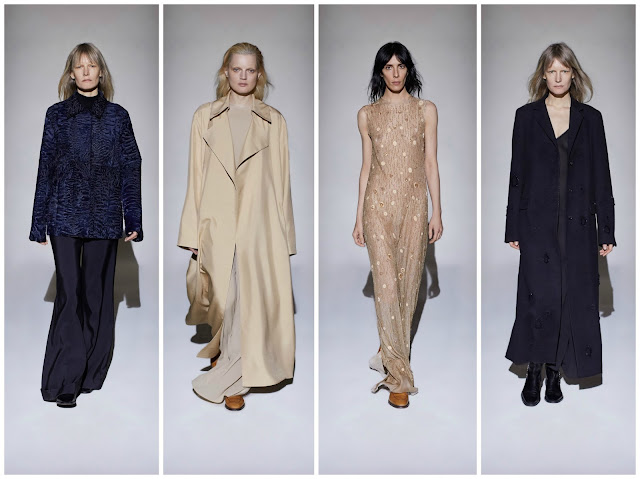 For the second time in history, the Frick Collection in Manhattan opened its doors to a fashion show. Also, for the second time in history it was Carolina Herrera who had the honour of being welcomed by the historic art museum. To celebrate, the Venezuelan designer put on a show of classy daywear and evening wear modelled by the likes of Karlie Kloss, Lily Aldridge and a handful of other Victoria’s Secret Angels.

There was some signature Carolina Herrera looks in the collection. A shirt dress with sheer yolk, black sequins and chiffon panelling, or an off the shoulder dress (sheer yolk sleeves) that featured pearlescent qualities. Naturally, there was some floral printing and embroidery on the runway. It wasn’t all dull though. There was a layered fur coat which was quite something. A patchwork wrap skirt and calfskin bodice was also beautiful.

The Academy Awards are imminent and some stylists are scrambling to get options fresh off the fall 2016 runway. To land on this collection in particular wouldn’t necessarily be a bad think. A blush-coloured gown was embellished with daisies or a white silk gown with a keyhole cutouts will make appearances, no doubt, on the red carpet or at one of the after parties. But it was the look that Karlie Kloss closed out the show in that would look the nicest on the red carpet. A pleasant grape hue, the silk chiffon gown is an Oscar-worthy moment waiting to happen. 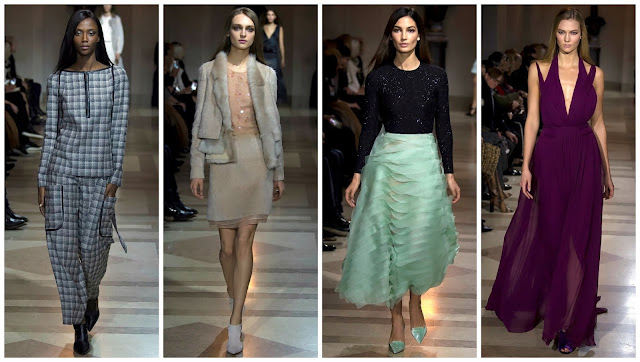 The morning of consumer friendly garb continued at Tommy Hilfiger. For his Instagram-worthy (there was a dedicated section for Instagrammers) show, a large vessel was constructed. ‘The Atlantic’ the show was titled. Perhaps in reference to the Titanic, which set sail from Cobh to New York in 1912. Enlisting model Gigi Hadid—who had been promoting the show on her Snapchat the night previous—to open, the supermodel took to the runway in an outfit that was heavily influenced by the early 1900s and could even have a fixture in last year’s Brooklyn, starring the Oscar-nominated Saoirse Ronan. Her dress was emblazoned with various entailments of boats, steam-engined ships, wheels, anchors, a shark fin lurking atop the ocean. Black silk strips, increasing in size, made their way down the dress. Silver heels and frilly socks completed the look.

The collection was commercial, innocuous and filled with sailor references. There were stripes, high-waisted sailor trousers trousers and so on. And though it was presented innocently, aboard a gargantuan set, you couldn’t help but think back to the Prada menswear collection which sparked debate in January. The Titanic was a mass migration of Irish people to America, in search of a better life, never to return to their homeland. This is extremely pertinent to the ongoing migrant crisis. Usually a source of high-spirited entertainment, rather than weighty fashion content, this Tommy Hilfiger collection was different from the rest. There was a world view at the centre, which is frankly brave for him to do. It’s uncommon to witness a New York designer go against the grain. It was the sense of innocence that somewhat masked the macabre reality behind this inspiration. 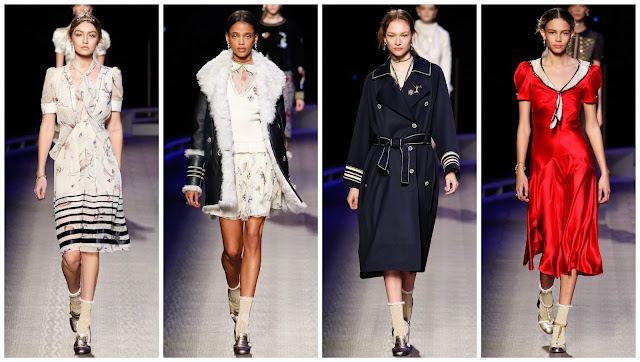 Besides the covetable metallic jacket, designers also want you to have a micro-pleated lurex skirt for fall. 3.1 Phillip Lim also made a case for the runway staple at his show. There was a rose gold mini, a golden column midi-lenght, and a figure hugging pencil. It’s not that strange to see Lim entwine this 70s glam number with his utilitarian, street wear aesthetic. In fact, the addition was seamless. The rose gold piece was encased in a zip-up sweater and a chocolate brown puffa jacket styled with boots with chunky knit socks. The gold piece was paired with an army green vest and an autumnally hued leaf motif. The latter was the only one that took a deliberate feminine direction, pairing it with a silk blouse printed with gingko flowers.

Phillip Lim has a knack for making the unknown and slightly askew ideas tantalise taste buds in his collection. There was a lot of that at play here. The way the trousers with elasticated waists were paired with a half thin leather jacket with puffy sleeves. Or the clashing print vests, asymmetrically cut were shown alongside herringbone parkas with fur collars and slashes in the sleeves. What’s more quirky about a lot of what was presented was the velour ankle boots. A street style must-have methinks. Amidst the weirdly wonderful concoctions there was some simplicity. Leather jackets with check printing paired with a Prince of Wales check A-line skirt. Just as gorgeous as the more daring side to this collection.

In a vapid, mundane landscape that the bigger labels of New York consume, Phillip Lim is reestablishing himself away from that. The result is a masterclass in texture, riffing on the age-old concept of femininity meets utility. There is a crisp air in the city, with spontaneous snow fall and icy patches here and there. But an exhilarating performance sure does the trick of warming you up inside. 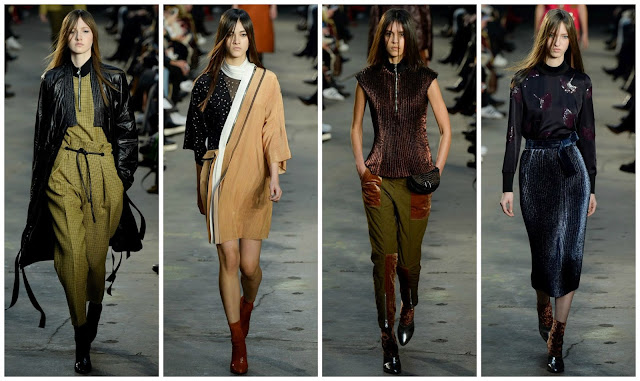 Thom Browne’s couture-like craftsmanship has always drawn in the fashion crowd. There’s two reasons for this. 1) He puts on a great show and 2) he designs some great clothes. On point one: this season he constructed “Washington Square Park in the [1920s]” for the presentation. The men and women traipsed around the intricately made set, and they were dressed as if they had been plucked out of the era and landed in 2016. On point two: the idea was a “woman reappropriating their wardrobes into new clothes,” which is ironic given he’s presenting an entirely new collection. The trousers were patched on the news with lovely blue panels. Once a blazer, a brilliant skirt was crafted from the old piece into some exciting. A red, white and blue was sewn across a pinstripe, double-breasted tuxedo jacket. A blazer-cum-fur-lined-jacket was a stunning piece. Combining pieces with other pieces has never looked so fantastic.

Browne is a highly intelligent creative. He is a witty man with a deft, couturier touch and both his menswear and womenswear are the most exciting shows of the season. In New York there are very few designers that have impressive, outstanding effects on the fashion conversation and on the individual. When you watch Thom Browne show impeccably tailored clothing inspired by Japanese schoolgirls of yore or 1920s New York, you can’t help but be entranced by someone who is so insanely creative if only for a minute. Rushing from show to show, and getting to events on time is on the mind of every attendee at fashion week. But when you sit down for a magical and theatrical Thom Browne show, time slows done and you’re lost if only for ten minutes, wishing you could relive it and hoping other designers can do the same. 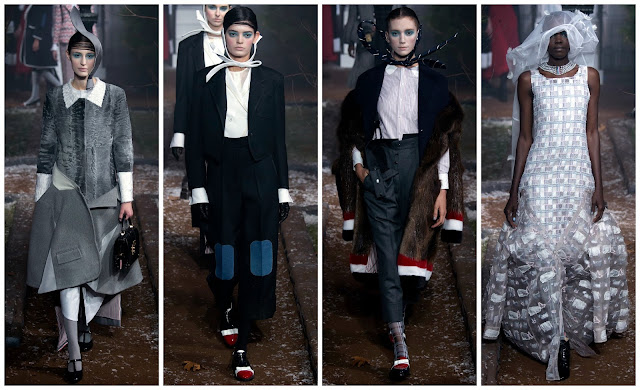 Street wear, street wear, and more street wear. There is certainly not a deficit of sporty utilitarianism at New York Fashion Week. Contributing to the growing trend, David Neville and Marcus Wainwright’s Rag & Bone delivered a display with an uncanny resemblance to a lot of things we’ve seen this week. Layering clashing textures, a reworked coat, puffer jackets and remixed denims. Also, like the other collections we’ve seen, the palette featured some army green, for good measure.

Six days into the season and the ubiquity of street wear is already becoming tiresome. In the case of 3.1 Phillip Lim, Fenty x Puma, and Baja East. The clothes seen there had their own idiosyncrasies and looked nice. Here it was more of the same. The parkas, for example, looked like they had been borrowed from another Rag & Bone fall collection. The pops of colour here were unique to Rag & Bone, but one was scarily similar to last season Alexander Wang. The branded farms here will sell magnificently, as will the tracksuits. But like Public School on Sunday, another overhyped label presented easy, wearable, commercial clothes that don’t offer much to the conversation, besides increasing the amount of mediocrity at NYFW. 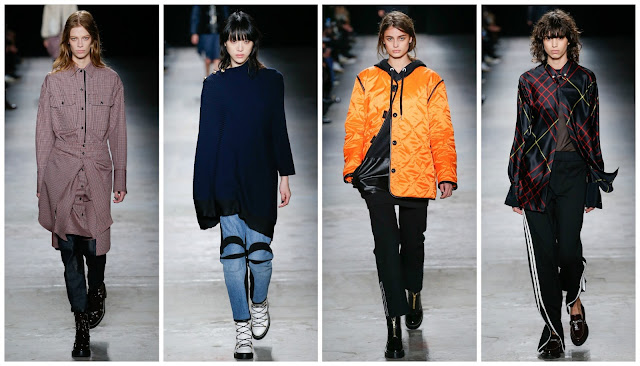