Bureau Betak, production designers, transformed Spring Studios once again for the Lacoste show bright and early on Saturday morning on the fourth day of New York Fashion Week. The wooden structure resembled a chalet, a luxury one that Lacoste customers will be staying in this fall. To keep warm, Felipe Oliveira Baptista delivered a fashion forward offering for the jet set. Looking at “carefree elegance,” the clothes were an après ski mid-morning dream.

From PVC coats and gloves, jumpsuits and sweaters for hitting the slopes, there were beautifully dabbles into eveningnwear: an ochre wool dress with zip up sleeves, a striped sweater and skirt paring. A bare-faced Anna Cleveland took to the runway in an oversized teal coat, a powerful statement from Lacoste. I don’t think I’ve ere seen refined elegance in the same vein as this. Thankfully this wasn’t an entirely serious affair. 80s video game-inspired embroideries lit up the collection. Lineisy Montero’s hoodie dress featured a pixellated character in various skiing positions.

One young man, with a hoodie emblazoned with skiing figures was already looking to 2017, with the year printed boldly across the chest. With talks of our (hear it comes) “broken” fashion system, some showers might’ve turned their noses to this. It was audacious, but it’s fall season and the fashion industry always has a predilection for the newest things. After all, this is F/W 2016.7. This won’t hit shelves for another six or seven months, but I’m sure some customers will be looking to next year by then.

Lacoste is midlevel luxury brand. The image in my head of the brand isn’t that of a wholly exciting one. 'Banal clothing for the superrich, crocodile-logoed t-shirts, sportswear.’ This season, my view of the Lacoste label shifted. The womenswear was much stronger than in previous seasons, due to interesting shapes and the colour palette. The menswear wasn’t that good, but there were a number of pieces in there that I wanted. I predict I won’t be the only one who takes a liking to some of the things presented here. 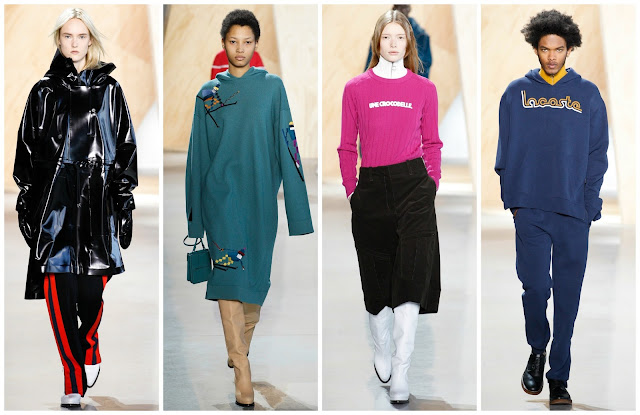 Dion Lee has started his past four shows with a series of white looks. Crisp white and the Australian designer seem to mingle well. This season there was a less romantic and more marvellous superheroine vibe from the pieces. Irina Kravchenko opened the show dressed in a lab coat belted at the waist and paired with white ankle-grazing trousers. It’s no surprise that Lee is often compared to an engineer. This lab technician was the superheroine at the beginning of the film.

As the rest of the collection developed there were a few burgundy looks which looked increasingly better with every design. A sharp blazer dress, small leg-o’-mutton sleeves and a wrap dress. Then there was electric blue and navy lighting up the catwalk. Those were also an exercise in large shouldered structure. One jacket featured, and the few preceding looks, all featured Swarovski embellishment. Indistinguishable from the perforations, the shimmering crystals were a delicate, blink-and-you’ll miss it addition, but welcome to the collection. The khaki coloured looks required an oomph and the collaboration ensured that.

Though not explicitly stated in show notes or otherwise, Lee’s collection did celebrate the form of superwoman not commonly associated with the usual depiction of a vigilante or heroine. Instead, these clothes were for the everyday woman who values precise tailoring and has an eye for some sparkle. This was an all-rounder of a collection. 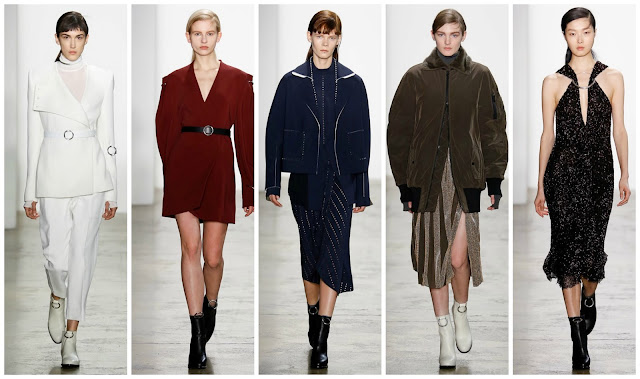 One thing guaranteed, you can always trust Max Osterweis and Erin Beatty of Suno for great clothing. This season, however, there was an amplification that transformed great into brilliant. The design duo showed at Pier 59 Studios and sent down the runway beautiful clothing, exploring “the idea of subversion and tradition.”

At the beginning there were scenes of a schoolgirl-cum-grown-up decked out in plaids. Thankfully, they didn’t settle for banality. There was an empire waist shirt and an obnoxiously large pussy bow, an overly long pinafore styled with an oversized shirt, a layer piece with lace accents. The multicoloured cashmere sweater, worn by Dilone, is perfect for current New York frigid temperatures of -10C. The whole collection posed a challenge to normality. A denim dress was presented in a slightly “uncomfortable” way and a navy coat featured a neck that doubled as a scarf and balaclava covering half the face.


The metallics and embellishment used in this collection were dazzling. A sheer blouse was enriched with crystal embellishment, florals appearing in 3D via the use of silver foil. If a micro-pleated gold lurex skirt isn’t flamboyant enough, the addition of golden florals further enhanced the piece. Aamito Lagum closed the show styled in a gold lurex dress. Stunning. Those looks were daring but recognisable was the Suno handwriting. “Familiar and new, pretty and off,” they said when speaking to Observer. If that’s not an apt description of the fashion system as a whole then I don’t know what is. 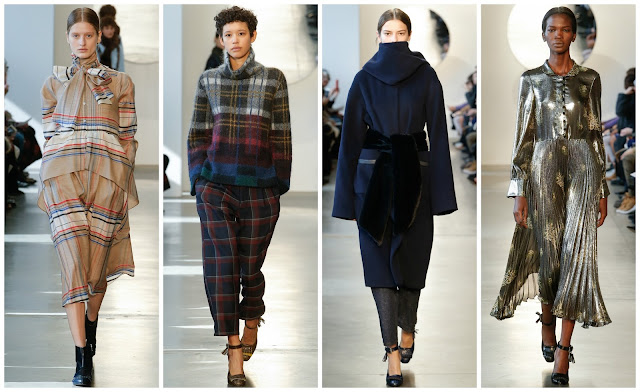 Scott Studenberg and John Targon’s Baja East show yesterday evening fell right after the Alexander Wang show. Luckily, the rebel duo presented a collection that easily held its own against Wang’s colossal event. ‘Electric Hum’ it was called, and the result: electrifying. There was the usual branded garb, ‘BE’ oversized hoodies, jewellery and sweaters (for men and women), but there was also delicate feminine and masculine touches peppered throughout the collection. Silk pyjamas sitting off the shoulder, a wraparound animal print dresses and to close the show there was a golden column gown (paired with sneakers, naturally). The masculine side of things was that bit more luxurious. There was menswear, but womenswear will always trump it. An ochre hoodie worn as a dress paired with a printed cardigan, or ribbed wool trousers and ochre sweater combo. For the men, Studenberg and Targon offered one sleeve sweaters and off-the-shoulder vests. The wool trousers were especially tantalising. The comfortable street wear air that has been permeating this season got another addition at Baja East. Here, it was ever wearable but preternaturally fashionable. 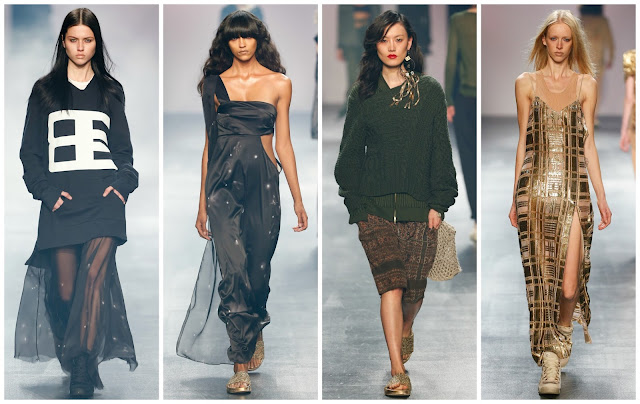