It’s no surprise that space is having a moment this past year. Star Wars: The Force Awakens and The Martian were both released between October and December of last year. Two weeks ago, Y-3 —Yohji Yamamoto’s Adidas division—launched a collaboration between Virgin Galactic. The design of the space suits “has been thoroughly exciting, challenging and rewarding”, says Lawrence Midwood, Y-3’s senior design director. Donatella Versace was also feeling the gravitational pull for her Fall 2016 menswear collection. The Italian designer was seeing stars and the result was a high-powered, sharply tailored foray into space.

The show space, shaped in a V, had pristine white floors, the inside to Donatella’s spacecraft. Out came joggers first, their glow-in-the-dark outfits illuminated the runway. “Sports and space,” was the inspiration; she juxtaposed the two nicely. A neatly cut grey tuxedo was styled with a white jacket, a Perfecto jacket with another. Metallic joggers were designed, perhaps not for the faint-hearted. One look consisted of a silver jacket with shearling accents and slouchy, matching trousers. It was those silver pieces that looked like spacesuits. Not exactly as nondescript as Y-3’s collaboration with Virgin, but why should they be. It’s Donatella Versace, her clothes were always going to be the standouts.

Arriving at the cosmos—as Mary Katrantzou did for her Spring womenswear collection—there was a heavily embellished white jacket. Pins, wheels, grommets and more adorned the body of the piece. Matching trousers provided the audience with more stargazing opportunity. 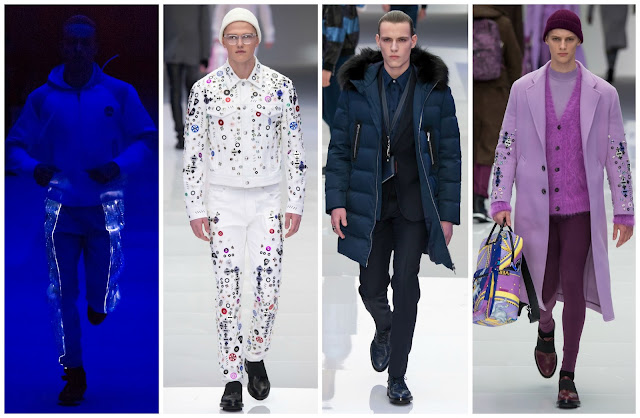 Alexander Fury reported on Vogue Runway the booming sales that menswear is experiencing at this Italian brand. He also pointed out that they amount to half of the business’ profits. It’s not that hard to believe considering how brilliant the clothes look on the runway. Sure, the colours may be a little deterring for most men; powder blue, lavender and pink won’t attract a large, potential customer base. However, the more you look at them, you enjoy them more. Whoever has the chutzpah to wear them, to you I say “brava.” A maroon bomber jacket, a heavily embellished lavender coat, a purple, turtleneck cashmere sweater? They all look fantastic.

Clearly in tune with the times, Donatella presented skin-hugging trousers—affectionately known as baller pants. Most men have a pair of those. They came in off-white, black, and a deep plum hue. Other pieces that I see appealing to customers are the accessories, specifically the hats and trainers. Deftly preparing us for the winter months, Donatella pepper cashmere coats (accented with a NASA/Versace brooch-hybrid), thick sweaters and fur-lined duffles.

Fashion’s obsession with space is one of the more interesting fascinations. There’s a wealth of possibility to explore, ideas to be acted on and clothes to be created. Donatella Versace’s clothes are unquestionably fashionable, the influence of space ostensible. Though the pieces may not appeal to every man, there is no denying that they’re great to look at. 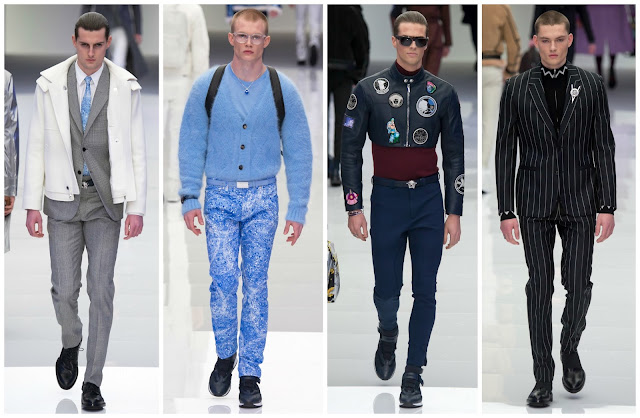