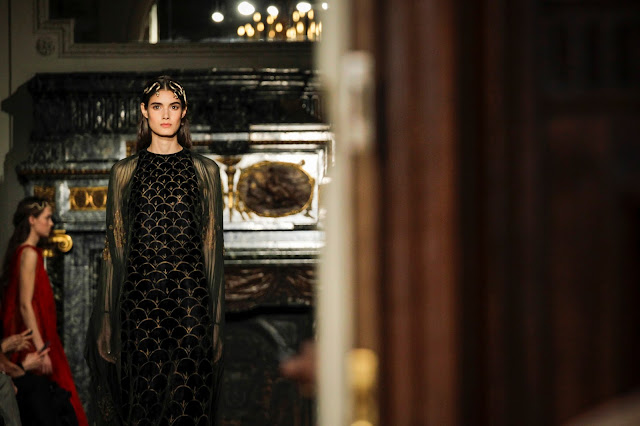 There is an irresistible grandeur embedded in a Valentino haute couture collection. Maria Grazia Chiuri and Pier Paolo Piccioli are a formidable duo with a magical touch. Not a season passes, womenswear or menswear, without extraordinary creations from the Italians. This season they borrowed historic fashion references, from the early 1900s. Mariano Fortuny y Madrazo was a Spanish fashion designer, famed for his Delphos gown. The opening look, resembled that of Fortuny’s: a sleeveless, a taupe pleated silk gown, given the Valentino treatment with marigold velvet. Velvet played a recurring play in this défile, coming in gentle accents or in a full gown, in a rich scarlet hue and with Fortuny pleats.

The models glided down the runway, though it could easily be misconstrued as floating. Silk billowed in the air as the models walked barefoot, and in sandals, on the buttercup petal-lined golden flooring. Angelic-beings, they delivered a melange of historic timestamps, from Roman times to the 1930s.

The audience was ensorcelled by a dazzling array of evening wear—perfect for the impending Academy Awards. No doubt, there will be a look from the collection on the red carpet in late February. One gown, with a low cowl neck, boasted a chiffon skirt enhanced with serpentine velvet accents in marigold and grey. Another Oscar moment waiting to happen was the lavish teal and gold gown with a deep, plunging neckline. Ornamental and decadent, Saoirse Ronan or Brie Larson would be perfect for this piece.

If last season’s Roman decampment from the Paris schedule, this show felt the knock on effects. July’s presentation referenced the dainty goddesses of Roman mythology, this season Roman civilisation was on their mind. White gowns, draped on the body beautifully, featured velvet decoration. Like a vision, Maartje Verhoef closed the show in a tulle gown with a netted bodice. I’m still scraping my jaw off the floor. Invisible sandals and excessive gold jewellery amplified the Roman mood. There were gold-disc body chains, custom serpent headpieces (designed by Harumi Klossowska de Rola), dripping pendants.

Luck has been bestowed upon the women wealthy enough to purchase Valentino couture. This heavenly collection was packed with 66 entrancing dresses—there wasn’t a trouser in sight; clearly their customer is focused on evening wear, a testament to their client base. Though some of the pieces mirrored those from last season, boredom isn’t an issue. When you’re stuck in a blissful dream courtesy of two magnificent talents, boredom doesn’t even cross your mind. 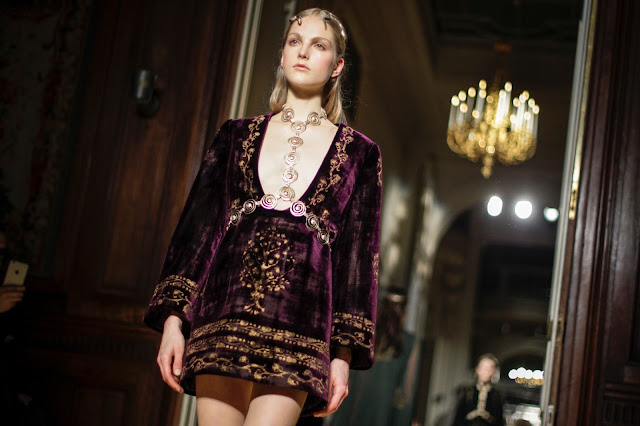 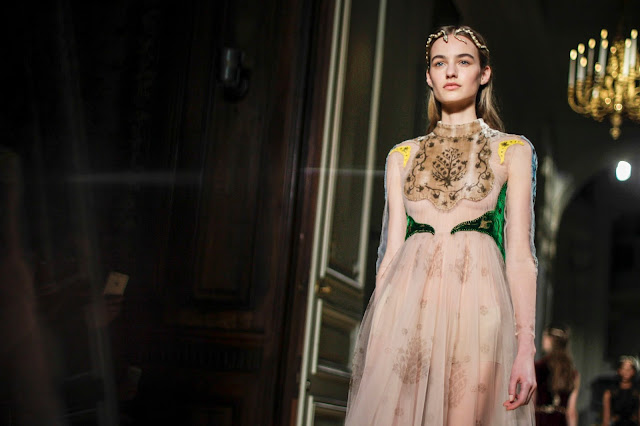 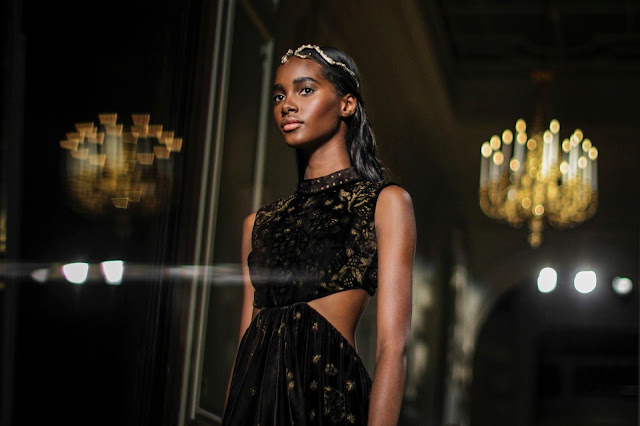 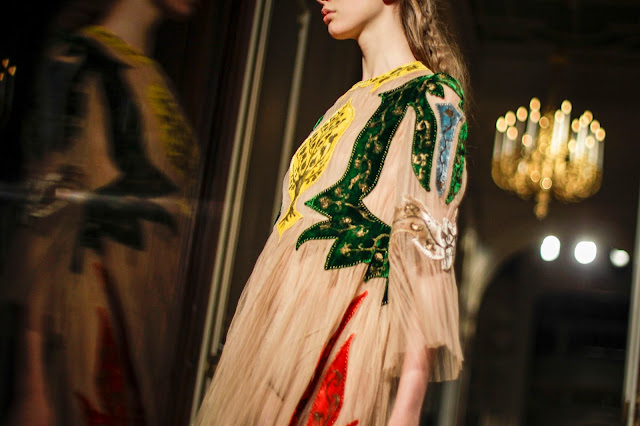 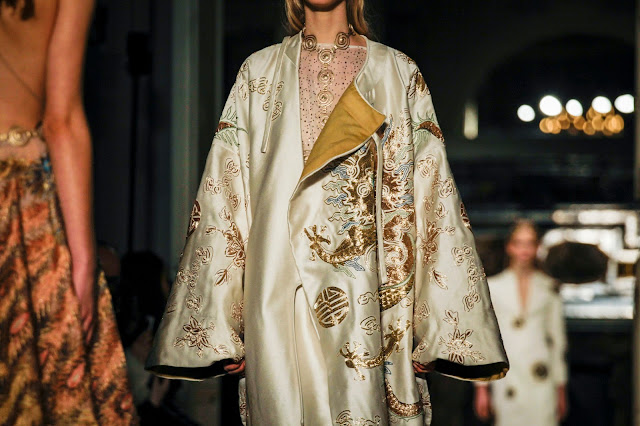 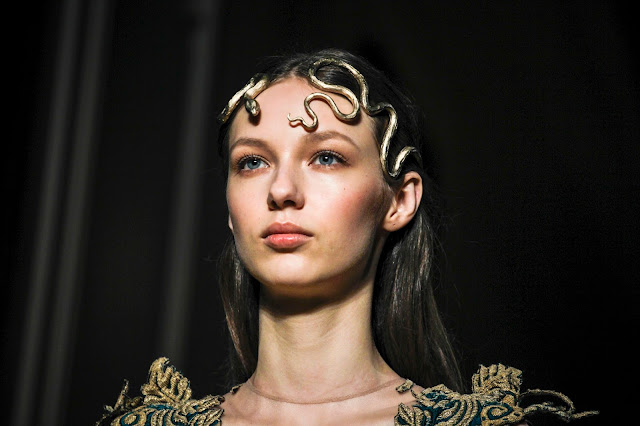 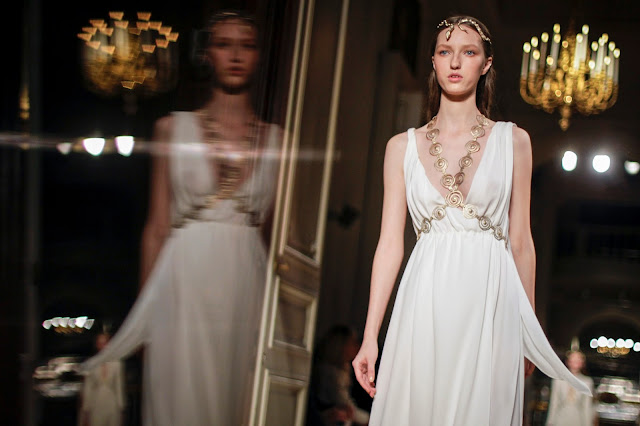 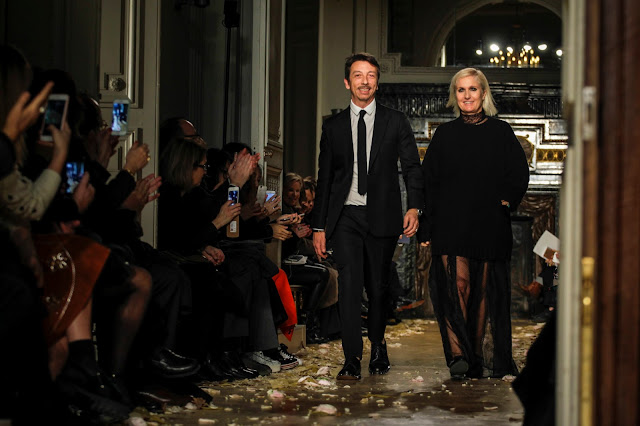