Today’s post is essentially a bumper issue filled with London Fashion Week’s newest, most exciting names. Boasting a plethora of talent, this season’s fashion week beset by a deluge of presentations. You’d blink and another presentation would’ve come and gone. Between the official BFC schedule, Fashion Scout, ON|OFF and miscellaneous off-schedule events there was a lot to be taken in. Just listing those entities was overwhelming. The six designers compiled in this post are those with promising futures, and they're not to be forgotten.

Sadie Williams first came to my attention when one of her gown’s was placed in Selfridge’s window. Two years later and she has exponentially grown as a young designer in London, a difficult city to break into the industry. For spring 2016 was sponsored by NEWGEN for Spring 2016—her second season working with the Topshop-funded initiative. She also had a spot in the designer showrooms in Brewer Street Car Park. A bunk bed set up with samples of her work was set up in a fraction of the space. Small space, yet it stood out more than the rest of the presentation.

Her collection was titled ‘Barnes B’, after her house at boarding school. The school discos of the noughties also played a part in the collection. Williams would customise her own clothes in her teenage years, creating her own backless tops and party dresses. Sportswear also took centre stage in the collection. Folded skirts, in printed lurex, gave the appearance of a sports skort. Apron style t-shirts were resembling bibs worn during P.E. Whimsical white sheer organza silk was festooned with bright metallic leathers. What’s not to love? I’d tell you if I wasn’t so taken by this magnificent collection. 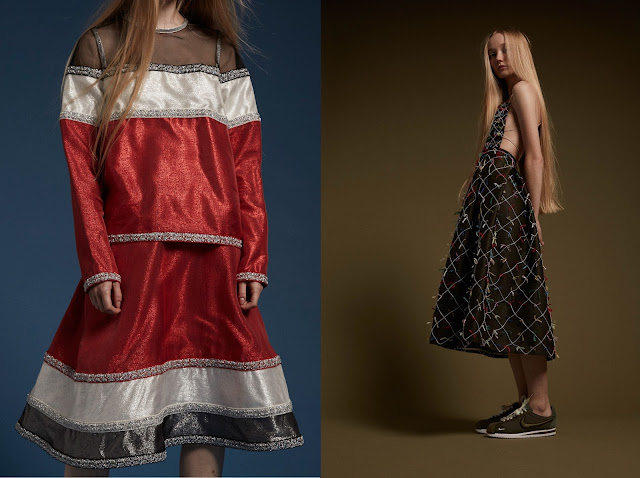 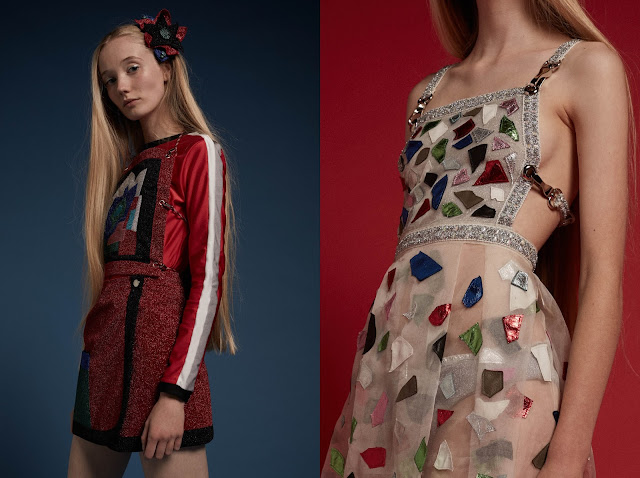 To tell the truth, the effect Ed Marler has on other people didn’t hit me until this season. Held in a backstreet courtyard in the depths of Soho, Marler’s Spring 2016 collection was another foray into a dark royalty. With models wearing high crowns . Transporting us back to medieval times via a post-apocalyptic world, male models—who wore dresses, informing the season’s move toward gender fluidity—had painted faces, like jesters. Bra cups as protective knee caps on cycling shorts, tinsel accented peplum jackets, bin-bag-esqe dresses, gingham bodysuits, slashed trousers, distressed denim. This distorted view of royalty through a dystopian lens has proved to be some of the strongest work from a British designer with tendencies to be anarchic in their aesthetic. I bow down. 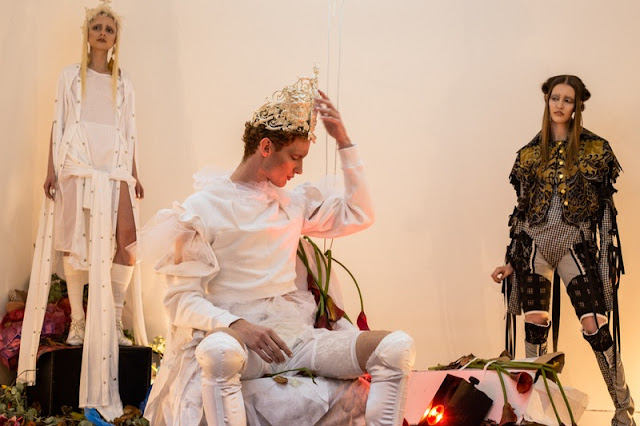 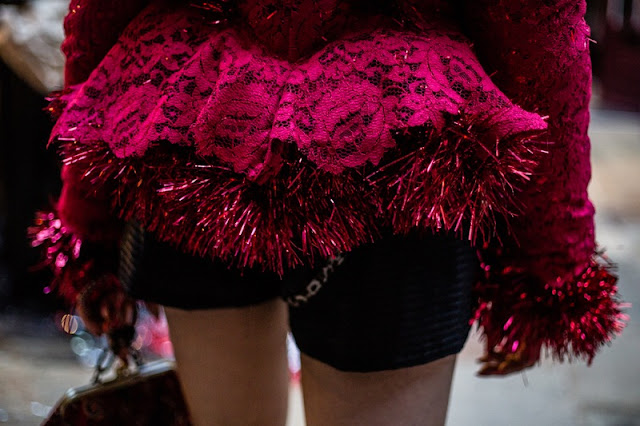 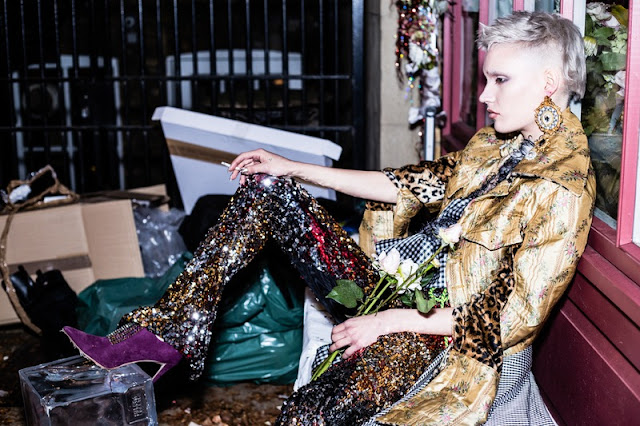 Marta Jakubowski joined Sadie Williams with a NEWGEN-sponsored appointment-only presentation format during the weekend. The German designer is noted for her refreshing, unique takes on classic silhouettes. This season she looked to women for her inspiration, but with a sinister tinge. “Women in mental institution, shelters and prison—women with a hard shell and soft core.” Constricting pieces bearing semblance to straightjackets were worn; that was especially visible with the bodysuits and underwear style pieces. Red, black and white. Three colours: red for anger; white for innocence; black, a barrier between itself and the outside world.

Having trained with Hussein Chalayan and Alexander Wang (to name but two), Jakubowski is clearly influenced by their work but never copies it. The subtle references to Wang’s street wear and Chalayan’s shapes with a Jakubowski flair made this a very enjoyable collection. 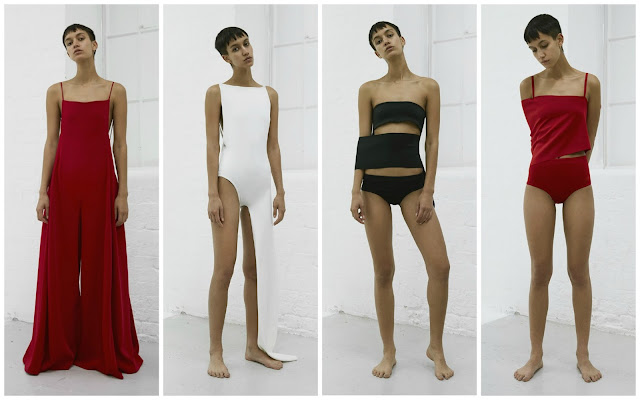 Phiney Pettman launched her womenswear label Phiney Pet in 2014 and the product is an endearingly saccharine teenage dream, occasionally equipped with dark undertones. For Spring 2016, the designer proposed the brief, “if Debbie Harry had a super sweet sixteen.” The collection, presented at a church hall—to symbolise the awkward teenage discos—was packed with quirky pieces festooned with hand-painted illustrations. In stark contrast to Claire Barrow who draws sinister characters, Pettman’s are childlike and innocent, though the talent required to create them is estimable. A Humpty Dumpty character, Bambi wearing a bonnet, donuts, birthday banners decorated one leather jacket. Confectionary items adorned another. In a spring season where a lot of designers sucked the fun out of their collections with austere outfits, Pettman restored a sense of effervescence that was lacking. 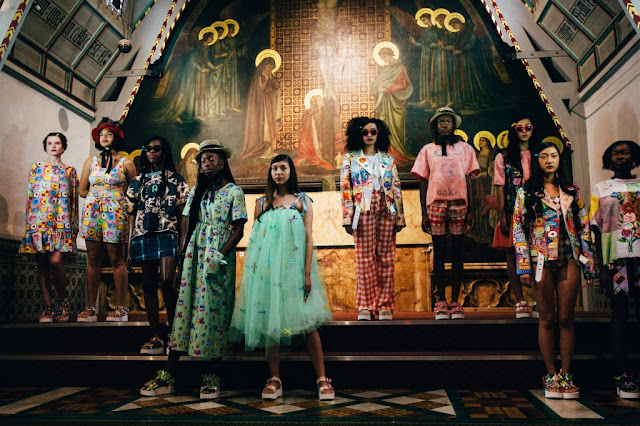 Mary Benson is perhaps my favourite designer to have feature in this collection. In February of last year she graduated from Fashion East, and the following season she's showing a solo presentation in the cramped Soho pub The Sun & 13 Cantons. Her “ethereal modern gothic babe” was permeated with hints of singer Melanie Martinez for spring. Her models wore exaggerated make-up looks, reminiscent of the American singer. These clothes will also be popular with ballsy fashion maven Rihanna.

The outfits all featured scribblings, an ode to the title: ‘Letters From the Darkest Corners of My Heart’. Words galore were thrown about on the clothes. Illustrations of crying girls emblemed the outfits. Albeit the clothes were a funky, colourful and ebullient, the show notes read, “behind luminescent prettified patternage lurk the subtexts and hidden depths of drama Mary Benson is known for.” The crying girl illustrations and make-up, “I don’t even know you,” was on a sheer shirt, “you have seduced and smother my heart! Cruel” on a dress. This self-reflective collection portrayed a vivacious persona but as you can see there something macabre fizzing under the surface. Mary Benson, with her wealth of talent, juxtaposes the two finely. 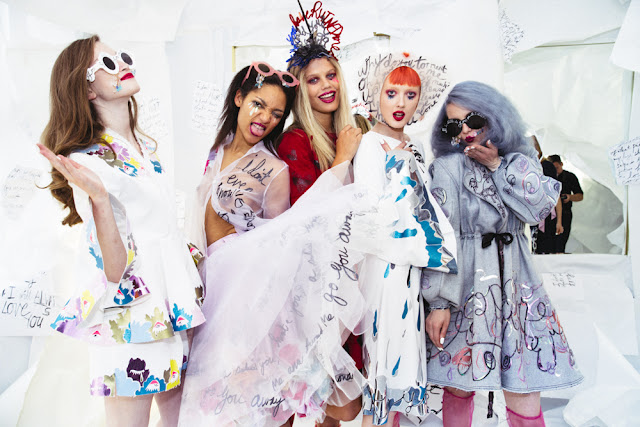 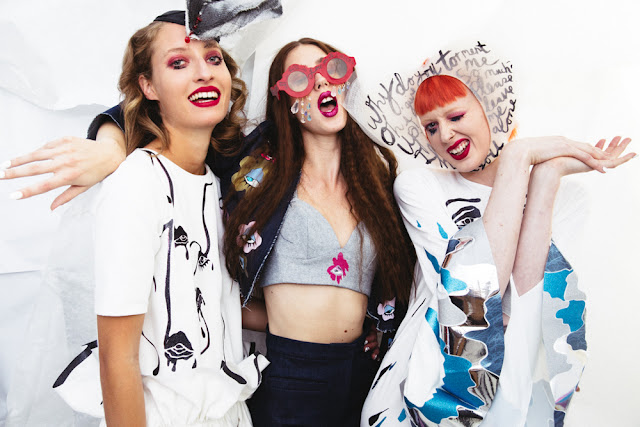 Last, but certainly not least is Sadie Clayton. Occupying a room in the Royal Academy of Arts, the Kingston University grad is “manipulating industrial materials and silhouettes to fit the female form.” With a love for copper, Clayton contrasted the metal against a select colour palette, consisting of blue, brown and black. The 3-D embroidered bomber jacket from the collection is a standout piece, but the faux-crocodile vinyl cape with quarterback shoulders and symmetric cut-outs had a louder voice. It is in no way wearable but it is certainly pushing boundaries. That’s the great thing about Sadie Clayton: there are pieces in this collection that are perfectly wearable, enriched with idiosyncratic details and there are pieces like the aforementioned cape, or a peplum trouser, copper plated breastplate and a full, tulle skirt. It’s the effortless mix that will propel Clayton into stardom. 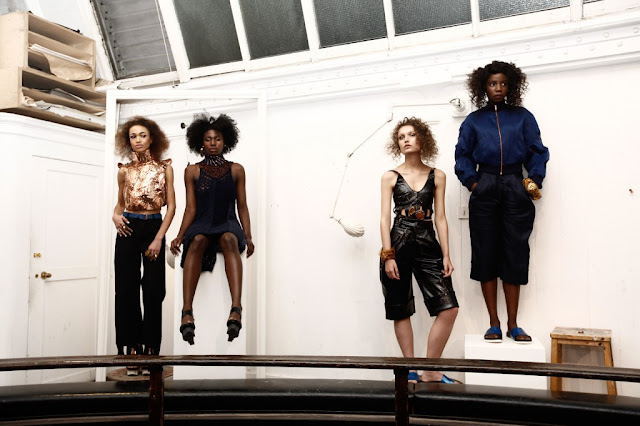 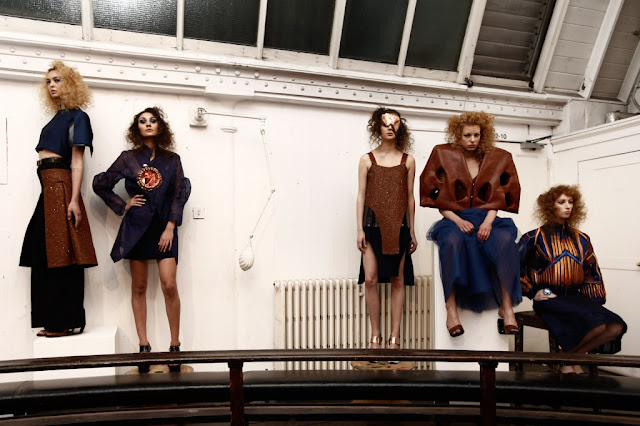