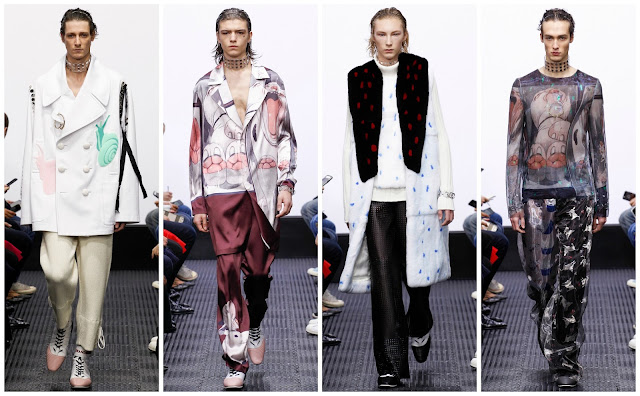 Maybe it was the blatant commentary on the pace of fashion that propelled J.W. Anderson’s recent menswear collection to the fore of every fashion news source? Or, perhaps it could’ve been the Grindr live-streaming controversy the show found itself in? Models, cast specifically due to age complications, paraded the runway to an audience larger than one perched on the benches at Yeomanry House. 100,000 people streamed the show on the gay hook-up app. Some have been quick to deem the pairing puzzling. I’m on the fence about that. More importantly, the real breadwinner was the strong lineup of clothes that hit the runway during London Collections Men.

“We operate in a world of speed,” Anderson said backstage. Fashion shows are a fleeting ten minutes, models zoom up and down the industry. Some designers have departed their positions at labels due to the vicious time constraints the industry presents creators with; for example, look at Raf Simons. The constant demand for new is supplied by designers who are currently trying to rectify the situation. They want, and need, breathing space between collections. For most, its between two and six collections. At an incredible pace, new designs are churned out, essentially every two months. Writing that down proves how unhealthy it is and as Raf Simons states, “it’s killing creativity.” Professing his love for the speed of change resulted in a collection that strongly disagreed with this statement. Sure, the models, pouting with petulance, stormed the runway rapidly, but the motif for the season was the snail. In pale pink and turquoise, two snails were embossed on a crisply cut white double-breasted jacket. Other cartoon representations of the slow, slimy creatures adorned silk shirts and trousers, jackets and coats. Though Anderson declared them a motif, not ulterior motives, it was clear to the audience that speed of the fashion industry is on everybody’s mind.
Anderson also looked to boxing for the collection. Fixing ones eyes upon the footwear and, intriguingly you’ll be met with boxing shoes. Usually for agile and quickstepping sportsmen (and women, of course), Anderson wants them to appeal to men everywhere for Fall 2016. The rise of Sylvester Stallone in 2016, thanks to his career-defining role in Creed (as Rocky Balbao), must’ve been on his mind. 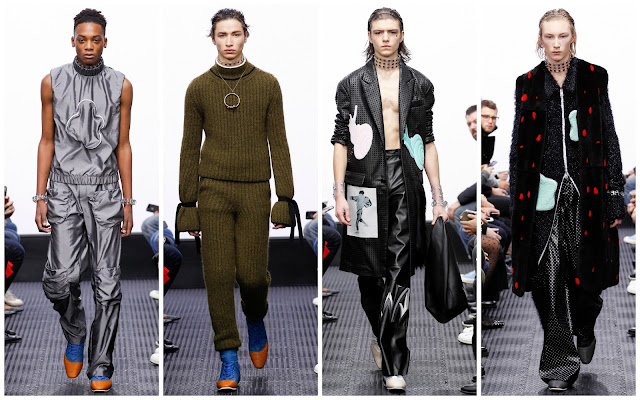 Motifs from the women’s pre-fall collection carried through to this outing. Noticeably, cloud-shaped pockets were seen on tops and coats. Tinges of Edwardiana were also visible throughout the 33-piece collection. The bulbous trouser leg, resulting from tucking the hem into the boot before fluffing it out, as seen in the women’s Spring 2016 collection, was present here.

It remains to be told whether or not the fashion industry plans on adjusting itself; to take a step back and view the negative effect of fast-fashion, in a, once, slower moving entity. There was an odd juxtaposition between snail prints featured on the clothes and the pace at which the models walked in this collection. Jonathan Anderson may have intended for the snails to merely be a mascot for the collection, but it mightn’t be foolish to wonder if there is more at play here. He didn’t say it outright, but the changing state of fashion was, inadvertently or not, referenced in this collection. The buyer will be wearing an emblem of that come fall.