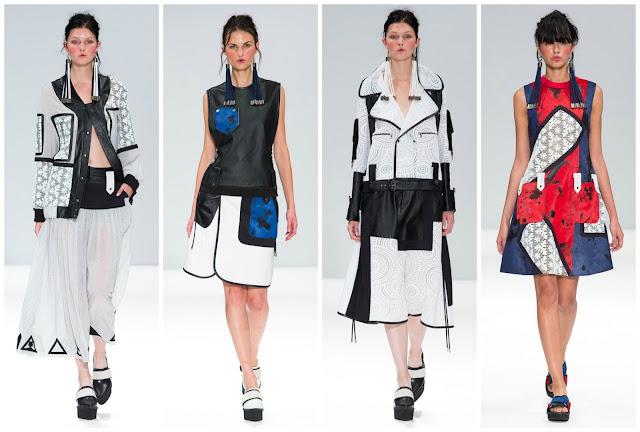 In Harry Potter and the Prisoner of Azkaban, by the genius J.K. Rowling, the precious Hermione Granger is presented with a Time-Turner necklace from Professor McGonagall. The necklace enabled Hermione to maximise the amount of elective classes she attended. Brilliant idea, isn’t it? If only one actually existed, then it would be possible to attend clashing shows during fashion week. Whether you’re caught in a heavy stream of traffic, or showtimes overlap, a time turner would allow you to see both shows. Personally, I experienced many times during London Fashion Week this season where one would’ve come in handy. The rainfall outside Bora Aksu—I would’ve bought an umbrella. Subsequently, I missed PPQ and Manuel Facchini. Also, while I was waiting in the rain outside Brewer Street Car Park for Bora Aksu, across town Jamie Wei Huang was presenting her Spring 2016 collection. That is a show I always like to see.

If you’re a regular reader you may be aware of my love for Jamie Wei Huang’s contemporary designs. Her Fall 2015 collection, ‘Nymphomaniac’, was in my top five shows of 2015. Her Spring 2016 collection was entitled ‘Hereafter’. Interpreting the afterlife, the collection "is a combination of different languages from different religions, cultures, countries, personal experiences.” Ultimately, Jamie arrives at varying concepts of “the great beyond.” Segueing nicely from her previous collection, the same design practices, emblematic of her ethos, showed up. Firstly, her use of leather holds up. Leather trim could be found on many pieces. Vests with buckle fastenings were also translated into this collection. Last season’s subdued teal became electric blue this season. A symbol of faith and heaven, the colour lit up a large portion of the collection.

Creatures pertaining to different religions’ beliefs adorned certain pieces. A horned, ghoulish monster was on an op-art and mesh sweater. Contrasting against a printed white, the creature reappeared in the next look. The imagery appeared in a fiery red later on. A horned goblin took cartoonish shape on a leather-trimmed biker jacket, and it was portrayed in red against a grey background in other matching pieces.

The collection was stocked with various cultural references but what will strike a chord most with the customer is the sense of involvement. The collection carefully weaves around different religious viewpoints and it positions itself, firmly, in neutral territory. How a viewer interacts with the piece will be a solely personal experience. That is a fine accomplishment on Jamie’s part.

Hopefully the fall season doesn’t provide any scheduling conflicts as tragic as this one. When Jamie produces a collection as involving and thought-provoking as this I want to be present, in the moment, observing the clothes in person. Like I said, it’s the sense of involvement you can feel at this show—through the images and notes, and of course in person—that proves Jamie Wei Huang is onto something that will be wonderful in the long run.