Fashion East, the greatest non-profit designer support and showcasing scheme, is fifteen years old. From the start the Lulu Kennedy-founded initiative has pushed some of the biggest London names to the fore. Gareth Pugh, Roksanda Illincic, Meadham Kirchoff, Simone Rocha and Craig Green have all graduated from the scheme and have gone on to lead successful careers. For Spring 2016, the designers were selected by a panel including Brix Smith-Start, Charlie Porter and Sarah Mower. Richard Malone (whose Spring collection I have already featured on this blog), Caitlin Price and This is the Uniform were the three labels. On Greek Street, a famous rue in Soho, the three designers occupied different spaces. Greek Street, Freak Street, the invitation read. It was a Greek Street takeover, and it was more jubilant than freakish.

Caitlin Price graduated with an MA from Central Saint Martins and was awarded the Armani Scholarship under the late Professor Louise Wilson OBE to get there. Taking over the Soho Revue art gallery, her collection was a commentary on the brave, sporty girl. "19th century elements with contemporary casual wear inspired by the drum and bass raves of Caitlin’s teen years,” was the official reference. A bustier styled with tracksuit bottoms and slip-on flip-flops? 90’s pop star creed. There was of course the bubblegum pink cropped sweater and ball gown covering one leg which went hand in hand with the lime green skirt and bra look. The latter drew connotations to Star Wars Princess Leia. The force of the blockbuster on fashion in unquestionable. There was a blockbuster air to this collection also. Shown it presentation form, it certainly didn’t detract from it being one of the most exciting tickets of the weekend. From ruffled bustiers, to stylish pink tracksuits and revealing ball gown skirts, Caitlyn Price is referencing her teenage years and invoking the revolutionary 90’s spirit in her customer base. Who said the 90’s were unfashionable? 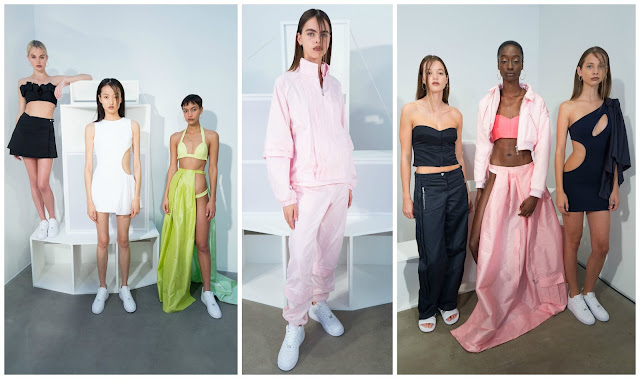 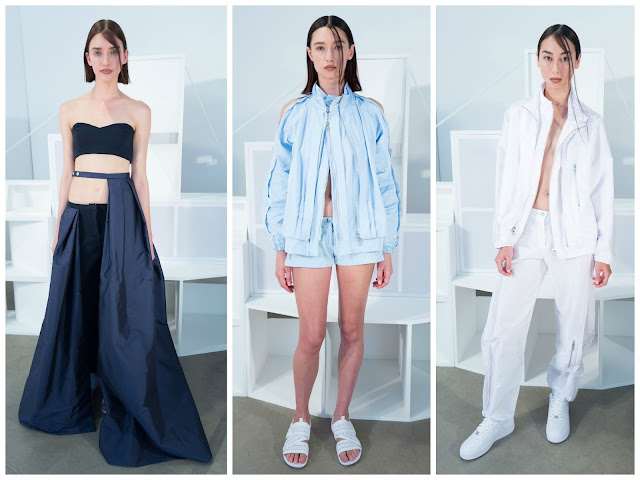 Jenna Young’s This is the Uniform is an exciting addition to the Fashion East lineup. Her girl is “very confident” and “isn’t really trend-led.” This springs to mind the individuality that London is known for. Ideas don’t necessarily overlap, and trends aren’t always plucked from the week. There was a correlation between This is the Uniform’s fine art-inspired Spring collection and Caitlyn Price’s. Both were clearly feeling the magnetic pull of the nineties. The collection skewered street wear and sportswear, something we also saw in Price’s collection. Models also wore white trainers and there were similar white mini dresses. The distinction was Young’s use of colour and exposition of skin. A net top and a white net dress left little to the imagination. Livid reds in a lustrous satin came in the form halter tops, pleated skirts, cropped jackets and disc-embroidered sheer dresses. A youth club, filled with pingpong-playing models provided an apt setting. These clothes are for the experimentalist. She’s confident and possesses a great deal of youthfulness. 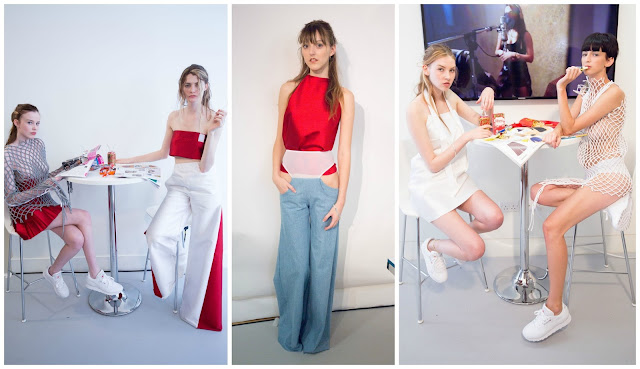 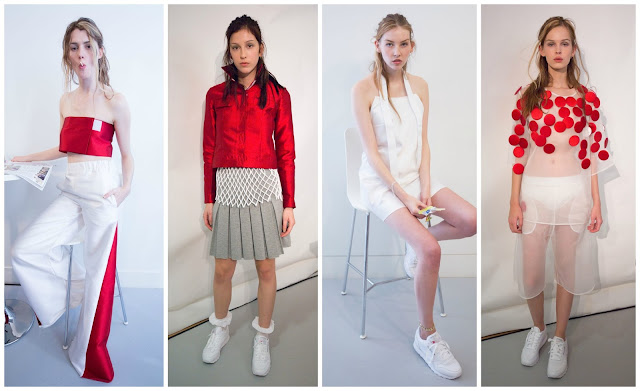 Email ThisBlogThis!Share to TwitterShare to FacebookShare to Pinterest
Labels: Caitlin Price, Fashion East, London Fashion Week, This Is The Uniform