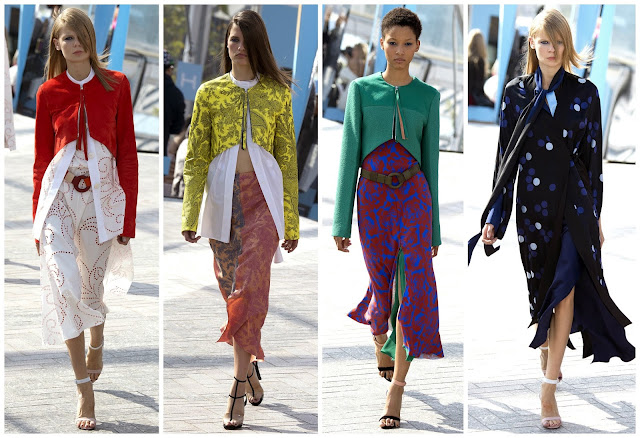 In the past week, news broke that Jonathan Saunders would be shuttering his namesake label. My immediate reaction was that of shock and utter disbelief. I am a devout Saunders fan, have been since spring 2011. The Scottish designer cited “personal reasons” as the grounds for his departure.

His last show was presented during London Fashion Week in September. A specially built show space was erected at Lewis Cubitt Square in King’s Cross. Like an open air theatre, the sun was beaming down on the guests. The models meandered the sun-drenched catwalk. The set added to the shows appeal. A rare moment where the London weather complied with the fashion season at hand.

Arguably, the show was his strongest to date. Taking references from Japan, origami-style folds, kimono silhouettes and silk panelling exuded a breezy, summery air. The flaming red jacket the opened the show was the first lesson in colour-blocking. A crisp white blouse and dress with coral detailing was worn underneath. An asymmetric red, striped top and skirt (with minuscule stripes) was an outstanding piece. Maartje Verhoef’s one-sleeved multi-coloured dress was the most memorable look from the collection.

As the show progressed the prints became more abstract. Paisley in yellow, coral and red contrasted against one another. Blocks of yellows complemented yellow and white paisley. A coral and blue kimono jacket was paired with a yellow and black paisley skirt. The more vibrant things got the show elevated to a newer, exhilarating level. 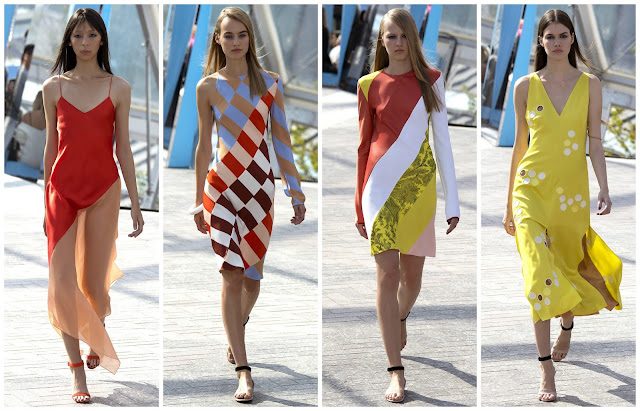 Houses like Christian Dior and Lanvin lost their creative directors in recent months. Both are tragic losses to the industry. The loss of the Jonathan Saunders brand is highly important. Small-to-medium business are now being affected by the demands that the industry is thrusting to the fore. As well as ready-to-wear, Saunders was producing two pre collections and menswear collections. I’ll touch on this in a long-form piece soon.

I would rank this as one of my favourite shows of the season. Certainly it is my favourite collection of his. The collection bears sentimental value. This is the last Jonathan Saunders collection, foreseeably, and that unfortunately casts a gloomy shadow. The Spring 2016 collection, bright and optimistic, manages to ward off sadness to an extent.

The brand acquired an investor, a new CEO and employees, as well as a shiny new workplace. Business wise, and creatively, the company has been flourishing. With each collection, Saunders was sharpening his colourful, abstract aesthetic. Over the last decade Saunders worked for Alexander McQueen, Pucci, Chloé and Paul Smith. He collaborated with leading retailers Debenhams and Topshop, and in America with Target. He was the recipient of the BFC/Vogue Fashion Fund in 2012. Michelle Obama and Carey Mulligan are fans. After accumulating world renowned status, it is upsetting to see the end of Jonathan Saunders. He was a brilliant designer and I’ll miss seeing his magnificent creations.
Photo Credit: voguerunway.com
Posted by Paulidoodles at 6:00 AM