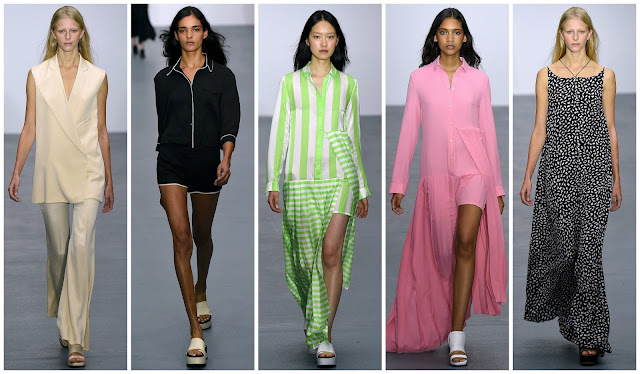 It is an incontestable fact that J JS Lee is the London queen of minimalism. Opening London Fashion Week season after season, Lee doesn't throw too many curveballs. Her Spring 2016 collection could be described as the curveball. The fit was less structured, more fluid. There were more colours than the standard black, white, navy and grey-bright colours: lime, powder blue, rosy pink, soft lemon. It was a slight shock to the system on a damp Friday morning. A necessary jolt to kickstart the five day event.

Lee said the collection was more personal and about “freedom”. Freedom was definitely symbolic in this collection. The designer is letting herself loose from her preset reins. She’s venturing into the freedom land of the 70’s. The silhouette was airy and loose. It wasn’t the usual constrictive spring offering from the South Korean designer. The first look, a precisely cut sleeveless blazer worn with supple trousers. It maintained the sharpness of previous collections. A black shirt with white piping, though tucked gently into silky shorts, nothing was sloppy or distasteful. It was a breath of fresh air. The pyjama dress, a lime and white striped gown with an asymmetrical hemline, wasn’t the prettiest but it was a bold statement. It firmly declared Lee’s stance. It confirmed to the viewers that they shouldn't expect too much of the same.

Look 30 was a wide-neck floaty gown with a white speckle print. You could’ve have shown me this and I wouldn’t have suspected it to be part of a J JS Lee. In the same vein, the final look, a pink, striped asymmetrical gown was the polar opposite of what I expected to see in this collection. It was the unexpected that made this collection all the more splendid.

Lee graduated in 2010, alongside Matthew Harding (of Palmer//Harding), Thomas Tait and Simone Rocha. The latter have gone on to be two of London’s most sought after designers. With a collection as strong as this one, I won't be surprised to see more attention shift towards Jackie Lee. She deserves it.