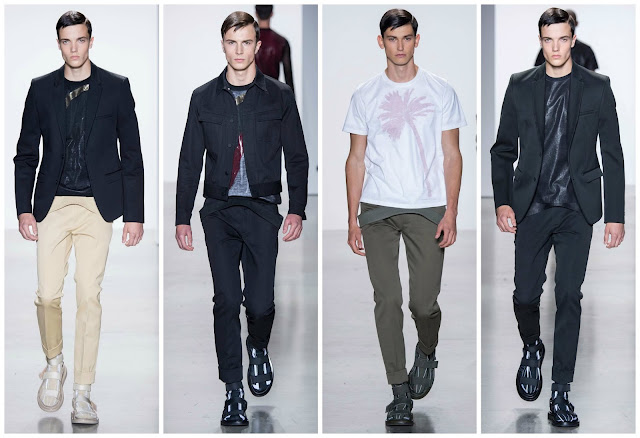 Unlike my awareness of womenswear, which I consider to be quite good, my knowledge of menswear is flawed. There is a certain level of unfamiliarity that I hope to tackle in 2016. An example, I was unaware that Italo Zucchelli was the creative director of menswear at Calvin Klein Collection. The Italian designer moved to the label from Jil Sander in 2004. Since his arrival at Calvin Klein he’s been presenting a juxtaposition of what the label “could” be and what the label “should” be.

For Spring it was Ed Ruscha’s palm trees that inspired the show. Ruscha is famous, not only for being part of the pop art movement, for his photography of commonplace things such as gas stations, but this collection looked to his photos of palm trees. Andre Doyley wore a black t-shirt, at the end of the collection, emblazoned with a silver palm tree. This collection was quite tame in contrast to previous seasons. Taking a leaf out of Ruscha’s book and looking to the ordinary, the collection ended up being vanilla (literally) and quite boring. Sure, there were some nice, visually appealing pieces in the collection, but a lot of it could've easily have been branded as Topman; the palm tree print t-shirts, and the denim jackets especially.

Covertly, the dreadful combo of socks and sandals made an appearance in the collection. Socks lined with white stripes, instilling a futuristic vibe, were in the same colour as the sandals. The result was quite strange. The white stripes on the black socks made them look like light-up shoes.

This collection was cohesive, sharply tailored, with a handful of visually stimulating looks. The military jacket festooned with pockets was cool, a throwback to Alexander Wang’s fall 2014 womenswear collection. The formal pieces, the blazers and trousers, contrasted nicely with casual denim. Ultimately, the collection didn’t contain the ebullience seen in other collections this season. I hope that Zucchelli will stray towards what the label “could” be. Over at the womenswear division, Francisco Costa has done that. It has suppressed the negative opinions I had about the label. I am confident that Zucchelli can do that for the menswear.
Photo Credit: voguerunway.com
Posted by Paulidoodles at 6:00 AM