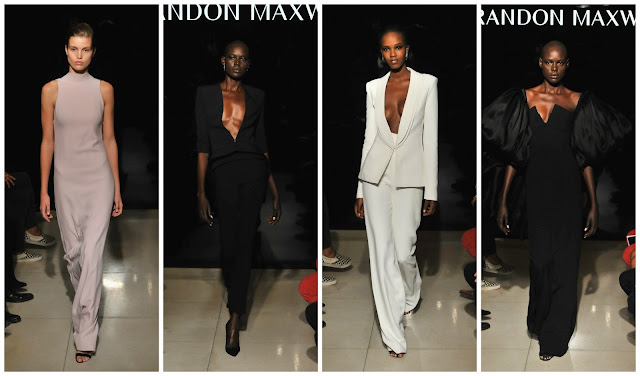 New York is the hub of American luxury brands, and the hub of American fashion. It hosts, biannually, New York Fashion Week and features some of America’s most notable designers. There’s Calvin Klein Collection, Ralph Lauren, Michael Kors and Oscar de la Renta (a Spaniard who came to New York). These luxury brands have cultivated gargantuan commercial renown. There are a new crop of designers that will be recognised in that category. Monse, who I spoke about yesterday, are planning to develop a lifestyle brand out of the label. Zac Posen is on the cusp of the luxury American brand. It’s Brandon Maxwell, is a new designer, and the one who seems to want it the most. “My goal was always to start an American luxury brand that I could pass down to my children and grandchildren,” he told Moda’Operandi. If that’s not endearing enough, cast a look upon his debut collection. Shown during New York Fashion Week, the presentation attracted Lady Gaga, Princess Deena Aljuhani Abdulaziz and Alexander Wang.

Chances are you’re more familiar with Maxwell than you think. He worked as a styling assistant to Nicola Formichetti where he met Gaga. He succeeded Formichetti as the fashion director of the Haus of Gaga, the signer’s behind-the-scenes creative team. He styled her for the Oscars, in a custom Alaïa gown with those orange gloves—the ones internet dubbed as rubber gloves for washing up. The singer has also worn the Spring 2016 on the red carpet. At the Emmy’s, Gaga looked resplendent in an off-the-shoulder piece; then there was a crisp white gown with voluminous sleeves; and then a flaming red gown.

The mentioned Gaga looks all hail from the Spring collection, an excitement venture into ready-to-wear from this clearly talented designer/stylist. Unlike other stylists turn designers, Maxwell has a clear vision of who he is designing for. According to him, the Maxwell woman is “uniquely poised and effortlessly striking.” That she is. There were plunging neckline power suits. Finely tailored trousers and dresses took to the runway in a limited palette of white, black and blush. Putting a spin on old classics, blazers were transformed into caped items; one top had a structurally layered tail.

Amidst the continual brilliance, there were moments where—in a lot of collections—failure could’ve seeped into the cracks. Brandon Maxwell prevented that by creating looks that were virtually better than the last. From beginning to end, exhilaration: no lull. It is rare that a collection made up entirely of tonal pieces can strike a chord, as this did. There was drama, sexiness, and serenity in this collection. This was an unforgettable thriller.