2015 has been a good year for television and film with more progressive characters being created. There is a plethora of television to watch. There’s over 200 shows on television in America. I don’t want to put a figure on the amount of films because I’m sure it’s crazy. The films that I’ve seen this year have been enjoyable but not of the same calibre as in previous years. The performances have, however, been at an all time high. Michael Fassbender and Kate Winslet were outstanding in Steve Jobs. Some of the movies on my list were released last year in America, but in January in Ireland. Wild starring Reese Witherspoon was one of my favourites. Jean Marc Vallée’s direction in particular floored me. The cinematography in Sicario by Roger Deakins was atmospheric and simply excellent. 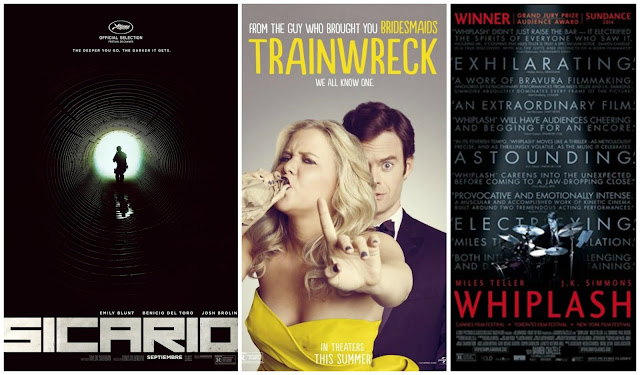 Television has also had quite a strong year. Netflix have produced some of my favourite television series this year. Jessica Jones and Master of None are two recently released shows to the online streaming service. Both featured finely calibrated performances and strong writing. I’d highly recommend both. Season 5 of Homeland returned in October and Claire Danes and Miranda Otto delivered great performances. Set in Berlin, the series explored relevant topics such as hacking and terrorist plots in major European cities.

In 2015 I had the pleasure of discovering the amazing Amy Schumer. She wrote and starred in an unlikely summer smash hit Trainwreck. Her Comedy Central TV show Inside Amy Schumer returned for a third season this year. I have only seen season 2 and it is easily the best comedy show I’ve ever watched. The Friday Night Lights parody ‘Football Town Nights’ tackled an important issue while being hilarious. That’s a feat. And finally, you must watch Amy Schumer Live at the Apollo.

Below are my favourite film and television series of 2015, arranged in alphabetical order.

Top 10 Television Series of 2015
Girls
Homeland
House of Cards
How to Get Away with Murder
Inside Amy Schumer
Jessica Jones
Master of None
Orange is the New Black
Scandal
Scream Queens
Posted by Paulidoodles at 6:00 AM

Email ThisBlogThis!Share to TwitterShare to FacebookShare to Pinterest
Labels: Best Of