In the past it was always the Prada show that presented us with the fresh model faces of the season. However, more recently it’s J.W. Anderson in London who gives us a glimpse at who will be next season’s most sought after models. Nirvana Naves opened the Northern Irish designer’s Spring 2016 collection during London Fashion Week. Mayka Merino, Emma Lund and Martina Lew were also exclusives in the show. Being an exclusive is fantastic for models and designers; it garners both exposure. But being in a truly unforgettable show must be even greater. That was the case in point at this season’s show.

As a designer who doesn’t rebukes predictability, Anderson threw a curveball and it was impossibly brilliant. It proposed a bold statement  and thus became the standout collection of London Fashion Week. The opening look consisted of a skimpy black bra top and blush trousers cinched at the ankles, giving a lantern flare. The 80’s inspired bra top was especially effective when paired with a white corset and a nude skirt. 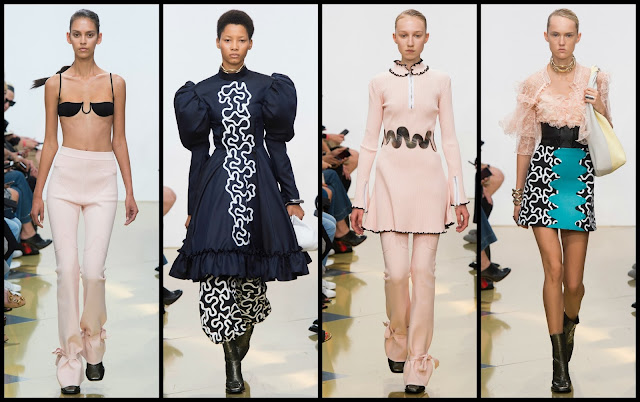 The 80’s was important in this collection as it was in the last ready-to-wear collection. The work of street artist Keith Haring inspired the collection. Squiggle prints seen on a many looks all derived from Haring’s work. Look 2, the top an ode to prairie dressing, the top to the 80’s and th squiggle print on the skirt to Haring. One pair of trousers, tucked into dark copper, square-toed boots, had one leg with black squiggle print and the other with a bright blue.

Inspired by late 1800s fashion, the mutton sleeves (with an 80’s sensibility, naturally) were a daring offering. When Lineisy Montero’s navy dress with a ruffled hemline and high neck took to the runway, it was as if we stepped into a time machine. The blue, white and black brushstrokes  on exclusive Mayka Merino’s mutton sleeve top was beautiful. It contrasted wonderfully with the yellow, white and black trousers.

The J.W. Anderson party girl was fully fledged this season. There was a signature, ruched denim top and skirt combo. Lace knee length shorts were paired. There was a sheer top, resembling plastic (as seen in Paris at Loewe), and black lace trousers. Alexandra Elizabeth’s black lamé dress was also paired with the black lace cycling shorts. Harleth Kuusik, who closed the show, wore a bright blue, and black and white squiggle print A-line mini skirt. Paired with this was a rose, ruffled lace top and cardigan.

In the eyes of some, this may be a ghastly outing. In the wrong hands this could’ve been a shambles. We must remember that with the virtuosic Anderson, anything’s possible and it will most likely be amazing. Your eyes are opened to new and exciting things at a J.W. show. I’m smitten by the sheer audacity of it. It was captivating; slightly mad, but wearable in most cases. It might’ve seemed inherently wrong but it all felt so right.