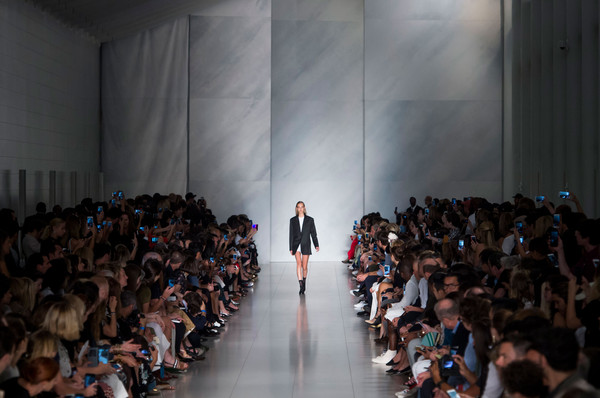 Donna Karan left her eponymous label earlier this year in order to focus on the Donna Karan Foundation. Her main line dissolved as a result. Her diffusion line, DKNY, was previously helmed by the Executive Vice President of Design, Jane Chung. Late last year it was announced that Dao-Yi Chow and Maxwell Osborne, the dynamic duo behind New York's hippest label with a cult following, Public School, would be taking the reins. I don't particularly see the allure behind the Public School. The clothes are nice but I don't see why people rave about them. There's nothing spectacular on offer. I always hope that they'll throw a curveball, shake things up and impress me. I'm still waiting. The duo finally, in my eyes, exemplified their true talent with the DKNY collection. They played to their strengths, menswear, and honed it in but in a womenswear collection.

In a season where we've an ample amount of ruffles, eclectic colour clashing, and prints, it was refreshing to be met with an anonymous, monochromatic colour palette. Sticking to grey, white, black and with an occasional burst of blue, the collection focused on shape and silhouette.

During the set playlist, an interruption would offer, “men think about victory. Women think about love, marriage. Me, I think about victory". Presenting us with a feminist statement, which is becoming currency in fashion, the clothes echoed what the woman on the speakers was getting at. The collection may have been looking to the 90's, but the reference is resonates with the present day. The DKNY power-dressers. The models’ walks were more of a stomp. Flouncing was a pinstripe, grey dress with a grey top tucked into to it.

A neatly cut grey blazer was may be a tad too austere for Spring but a lightness is even conveyed by catwalk images. The white blazer dress was another surprisingly summery look. My go-to red carpet favourite Diane Kruger would look excellent in it.

Urban sensibility and boardroom chic. If you need workwear staples, look no further than this DKNY collection. Magazines always talk about a “day-to-night wardrobe.” That was also here. Chow and Osborne's debut DKNY collection is for women ready for the streets, for the party, and for the boardroom. 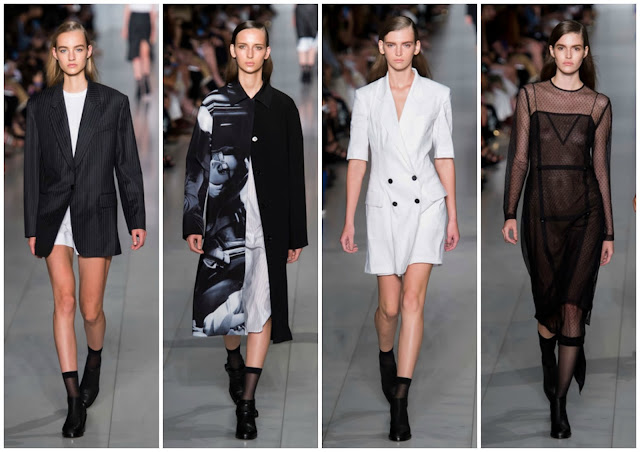