Paris Fashion Week has, arguably, the most exclusive parties of the season. Earlier this month there was the Anna Wintour-hosted Vogue & Instagram party at La Réserve restaurant, and Peter Dundas’ Roberto Cavalli dinner at Caviar Kaspia. However, the most prolific was Balmain’s after-party at Lapérouse. Designer Olivier Rousteing has a lot of friends, his runway and his Instagram display this. His Balmain Army consists of the usual suspects: Gigi Hadid, Kendall Jenner, Joan Smalls, Alessandra Ambrosio, Isabeli Fontana, etc. If that’s not #SquadGoals, I don’t know what is. The Spring 2016 Balmain show that preceded the after-party was another spectacle, and lesson high-powered glamour. Enlisting the help of the world’s top models, Rousteing put on a show, and it was just as amazing as you’d expect it to be. 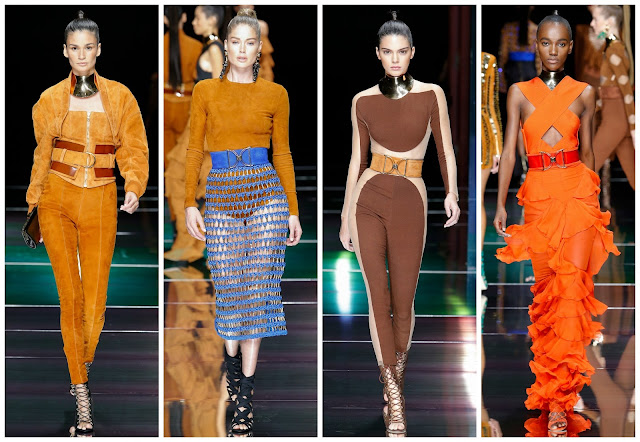 The colours in the collection were for the most part gradated, sandy orange, emerald, chestnut, taupe, nude, black and white. Eye-catching, decadently prepared; ready for a night of dancing on tables. Rousteing expressed that there wasn’t an inspiration for this collection but turning 30 had an effect on the jubilant affair. I’m sure that party was another epic with some table-dancing, Balmain-clad party-goers.

References of Kim Kardashian, a stalwart Rousteing for Balmain fan, could be seen in the collection. The suede rust bodysuit worn under a sheer netted skirt sprang to mind. I can easily imagine the reality TV star slipping into the sandy orange off-the-shoulder gown with cascading ruffles and a corset. The modern rework on a duster coat, draped elegantly over the model’s shoulders is a Kardashian/Jenner staple. The illusion jumpsuit worn by Kim’s sister Kendall, is another look that I can see on the soon-to-be mother-of-two.

The red carpet friendly gowns in this collection will hopefully not be wasted. On the right person they’ll look effortlessly beautiful, but in the hands of some it could become an over-sexualised tragedy. Kate Grigorieva’s beaded gown was lovely. The macramé gowns weren’t as enjoyable. Herieth Paul’s flaming orange criss-cross neckline gown with a skirt boasting an excessive amount of ruffles was easily the strongest piece in the collection. 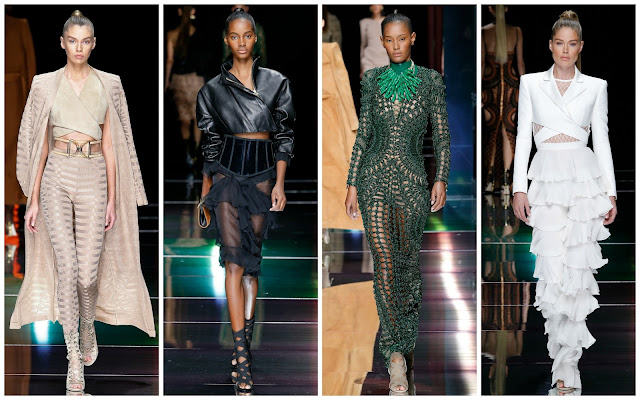 My question is: would this brand survive without the social media coverage it receives? If you were to take away the Insta-girls, the social-media omnipresence, the parties, would the shows be as magnified, anticipated and sought after. Personally, I think it would. Olivier Rousteing transformed what Christophe Decarnin created, in a respectful way. Yes, it’s for the rich party girl, a very exclusive customer, but that’s always been Balmain. Unlike Decarnin, Rousteing has to be careful as sometimes his collections are on the verge of being tacky. Some of these looks fell into that category, but others got away unscathed. Those were the memorable looks in this collection, and they were splendid.