Throughout my resort show coverage, posts have been littered with geographical locations where designers have held their collections. I think the most interesting one was perhaps the most plain one. J.W. Anderson hosted his collection closer to home. Not in the sweltering desert of Palm Springs. Not in the bustling capital city of South Korea. Not the third biggest city (by land area, population and density) in the world: New York City. It certainly wasn’t the idyllic commune of Théoule-sur-Mer in the South of France. Anderson’s location was more humble—an artistically inclined affair.

Kettle’s Yard in Cambridge, England. Kettle’s Yard is an art gallery that was the home to Jim Ede and his wife Helen. Jim Ede was a curator at the Tate in London. His house at Kettle’s Yard was a four-cottage conversion to hold his collection of early 20th-century art. On this occasion, the venue was to host another artistic medium; a fashion show.

For resort, Anderson rehashed one or two ideas that could be seen in the fall collection back in February during London Fashion Week. The vibrant colours from fall weren’t as haphazardly done in this collection. The brushstrokes were turned into neat and orderly lined ottoman stripes. The foil printed crepe, ruched mini skirt resembled the lurex used in last season’s ’80’s revival.

The J.W. Anderson ’80’s revival continued in this collection. A polka dot pencil dress with a flared skirt, paired with silver boots looked like it was fresh out of a nightclub. The denim pencil dress was also a gorgeous number that you could imagine Madonna wearing in the decade with a bouffant hairstyle, a bandana and a cropped blazer with the sleeves rolled up.

The accessories in this collection were quirky, naturally. A bass cuff in the shape of a hand was peculiar but welcome. The palladium-plated nickel brooch was equipped with hammers and wrenches. Pinned on the breast of an ottoman striped wool sweater, the sporty look was given a rough edge. The nappa leather wedge boots worn with all the looks were resonant of the decade of inspiration. Some boots featured a ruffle, wrapping itself around the boot like a boa.

J.W. Anderson is transforming the 169-year-old Spanish leather goods house Loewe, as well as working on his own womenswear and menswear labels. He’s creating ten collections a year. This doesn’t inhibit him from making the next one as special as the last. 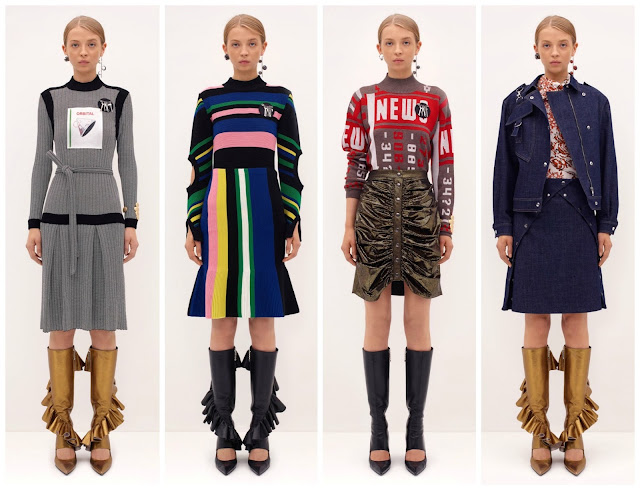