Ireland, my country, has a wealth of talent when it comes to upcoming designers. We have produced John Rocha, and his daughter Simone, Orla Kiely, Philip Treacy, Danielle Romeril, and Paul Costelloe. All of these designers represent us across the pond at London Fashion Week and our fashion identity as a nation. In Ireland, there are a number of college/university courses for fashion design. The Limerick School of Art & Design is an art college in Limerick (a county in the mid-west region) city. There was 28 fashion and design graduates in 2015, and in May they showed their graduate collections. I’ve picked 6 designers whose work have had a lasting impression on me. The group all had allegoric inspirations and they were executed excellently. These are the graduates of 2015.

Bridget Murphy was the recipient of the IFL & AIB Graduate Business Development Award worth €5,000. The prize includes a three month work placement at Danielle Romeril’s studio in London. Her collection, ‘Untitled Forms’, is inspired by American abstract expressionist painter Franz Kline. She focused on the composition of the painting ‘Delaware Gap’. The picture below shows black cotton, wide-leg trousers with a plastic short leg and a tube top with abstract painted strokes. Household paint was used to achieve the finish. Another tactile industrial material used was tape. Those materials were used by Kline in his work. Fraying and deconstruction through texture and form represented the emotional exposure of Kline, as a painter. The bright blues and turquoises as well as the sliver of red to be seen, and the sporty vibe might’ve been inspired by her internship at Marques’Almeida. This high quality collection is just a glimpse at the amazing things to come from Bridget. 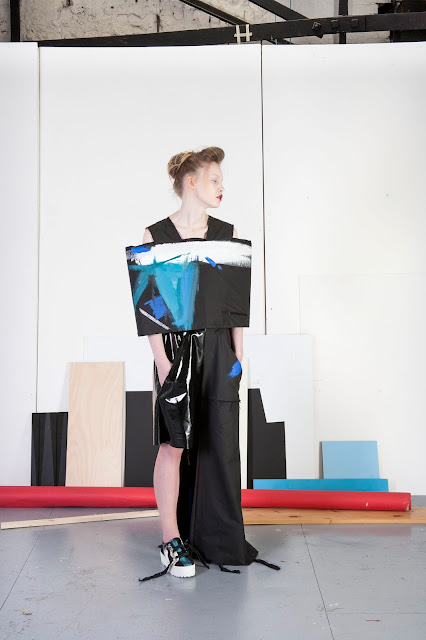 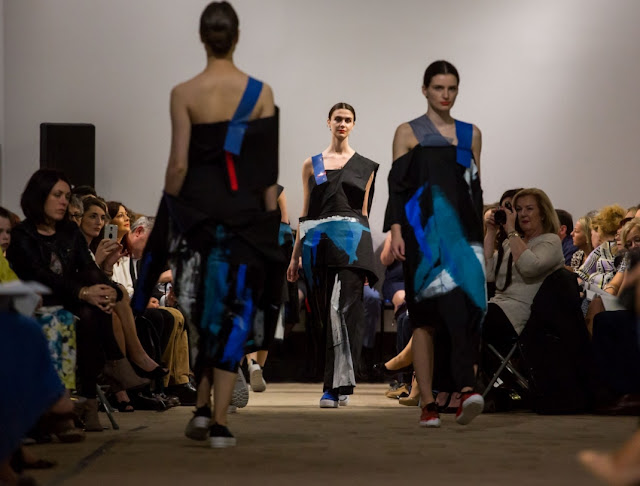 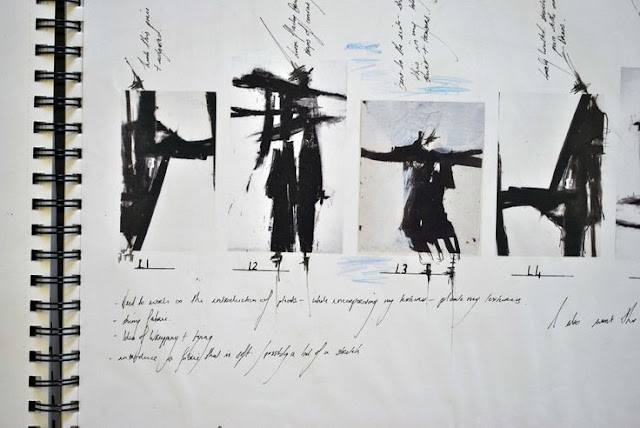 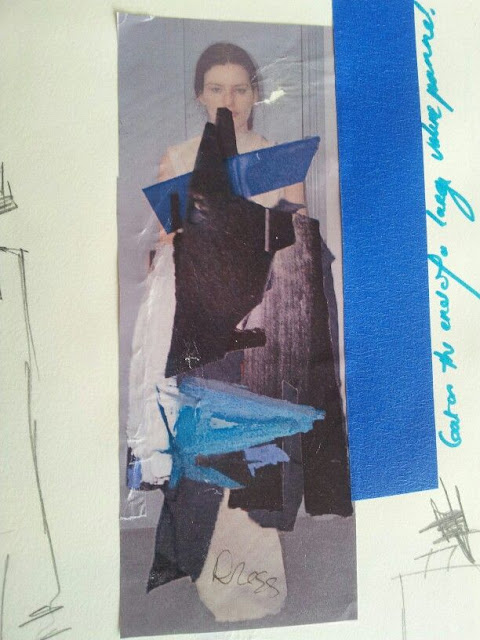 Ellen O’Donovan’s collection was simply put - delightful. ‘E.N.Y.’ was inspired by her travels in American in her teenage years. The collection sojourns through the innocence of youth, awkwardness, love interests and heartbreak. When Ellen returned to America a few years later, she interned at mega-brand Marc Jacobs, garnering valuable experience. She transformed the lessons she’s learned in life into this collection. Deconstruction techniques were used here. A striped varsity jacket had its sleeves slashed and reattached, as did other looks. Skirts were reworked to have three panels (like the three dresses in one that Michael van der Ham started out doing). The clothes had a personal stamp and branding signifying identity and labelling. A varsity jacket with E on its it breast. A dress with a centre panel had ‘J-1’ on it, and the date; 2012. These personal touches made this fabulous collection completely her own. 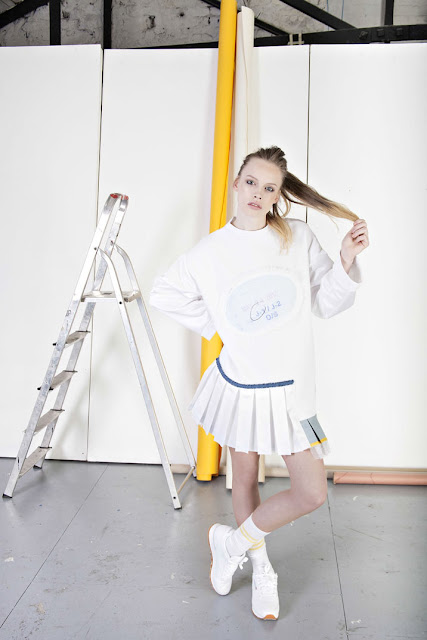 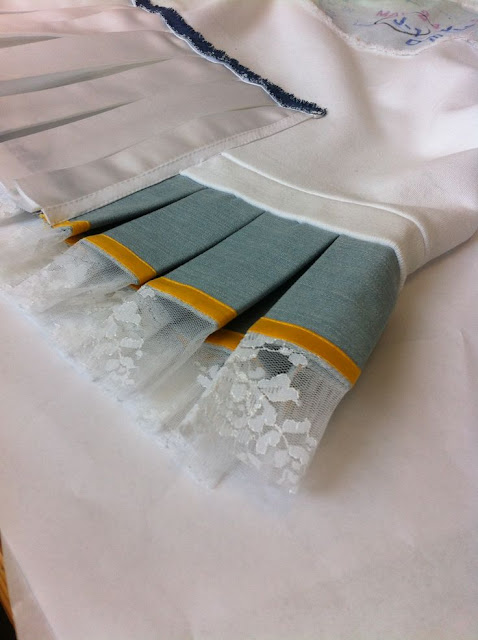 ‘American Beauty’ is one of those instantly recognisable movie posters: a naked Mena Suvari lying on a bed of roses. Bridget Peskett sought inspiration from the 1999 film for her graduate collection, ‘Bloomin’ American Dream’. Artificial fabrics like plastics and silicone are used to represent the protagonist Lester Burnham’s escape from the constraints of suburban life. The artificial fabrics also contrasts the appearance versus reality, and also to represent how the people of suburbia are trapped by the ideology of the American Dream. Garments are distorted to show the protagonist breaking away from conformity and suburbia. The best piece of the collection (below) is a dress consisting of a gingham bodice with a large rose appliqué, and an icy blue distorted skirt with rose appliqués. 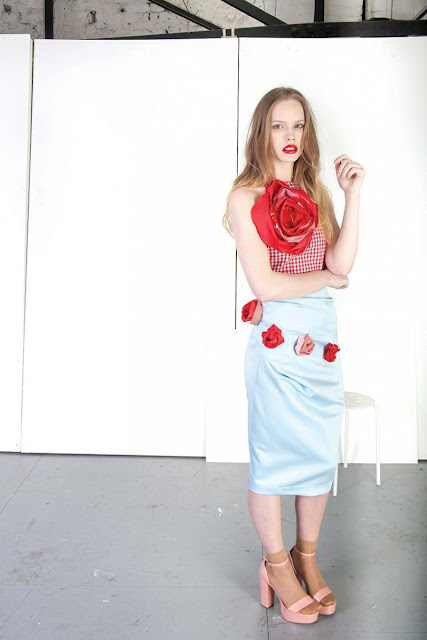 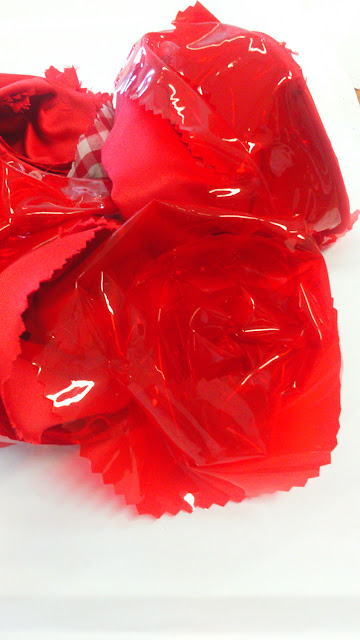 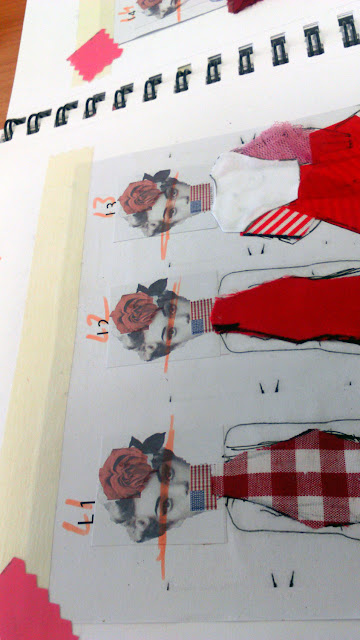 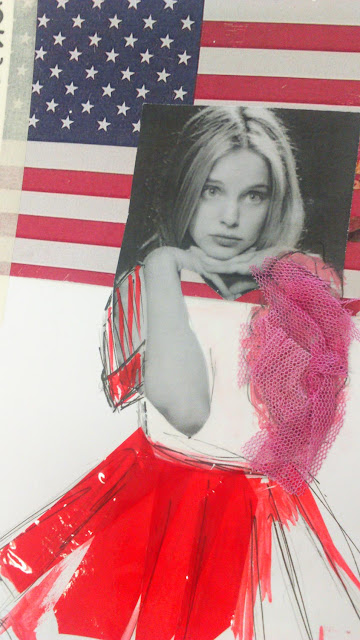 Drawing on the elements for a collection can be risqué. Hugh Finnerty’s ‘Drukkna’ did just that and exceeded expectations. Training at Holly Fulton (2012) and Jonathan Saunders (2013), the two immensely talented designers have rubbed off on Hugh - whose collection deals with physical and emotional responses to dealing with a loved one being lost at sea. Icelandic and Japanese folktales with similar cultural and emotional themes also inspired the designer. The comfort and calm in the chaos of understanding the central character’s loss, the swell and the unrelenting power of the ocean all brought influenced Hugh’s garments. Navy and white was used and the conceptual collection was most enjoyable. 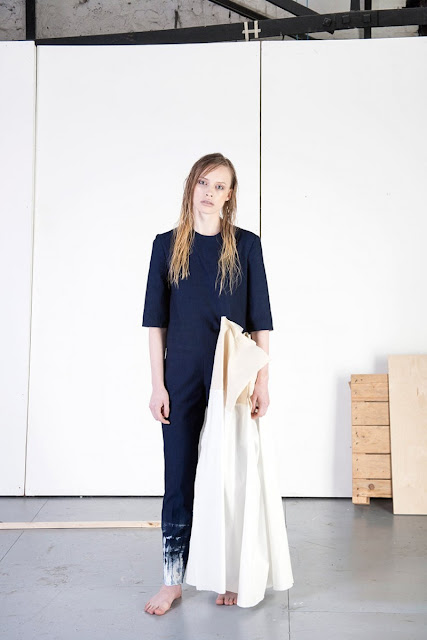 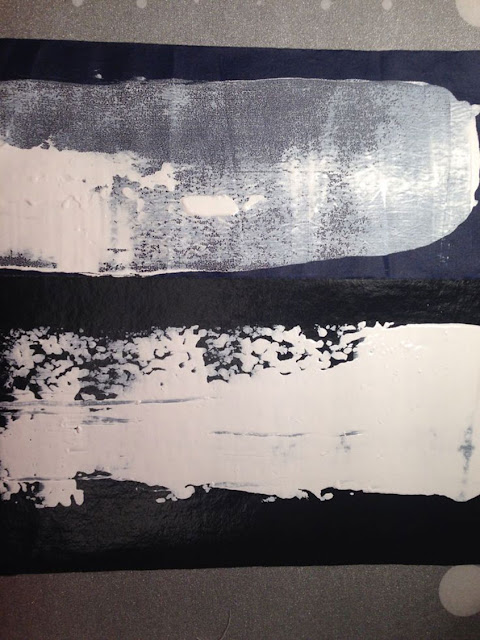 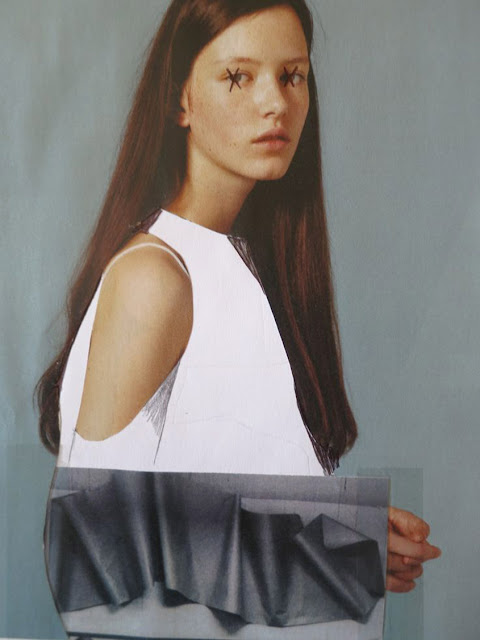 Lisa Corbett’s collection ‘125th’ probably had the most compelling of inspirations. It is based on a relationship between a mother and daughter in a rough, drug-infested area of Harlem. The mother’s “work” life was juxtaposed with the innocence of the daughter during her play time. The aim of the collection was to capture a day in the life of the little girl, to reveal the disintegration of innocence and the overwhelming impact of prostitution, and to display the breakdown of a tumultuous relationship between mother and daughter. Yes, that is a mound of largely indigestible information. However, Lisa executed the thematic influences brilliantly. A Mickey Mouse t-shirt-clad person was on Corbett’s mood board. There was a certain dingy Disney fairytale tone about this collection, primarily because of the colours and the inspirations. Brother’s Grimm 21st century reimagining, anyone? This was my favourite collection of the large bunch. The clothes were funky, well-made and deeply inspired. 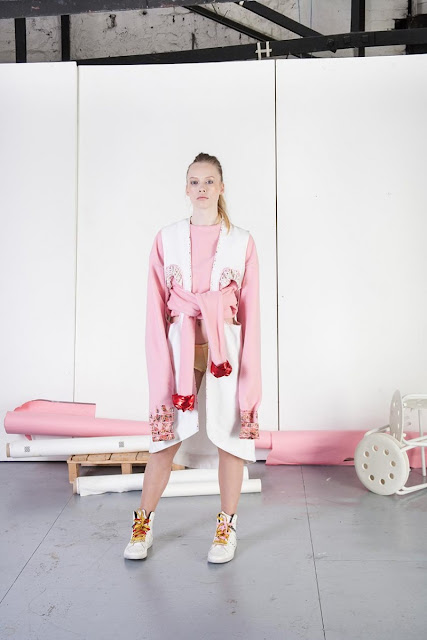 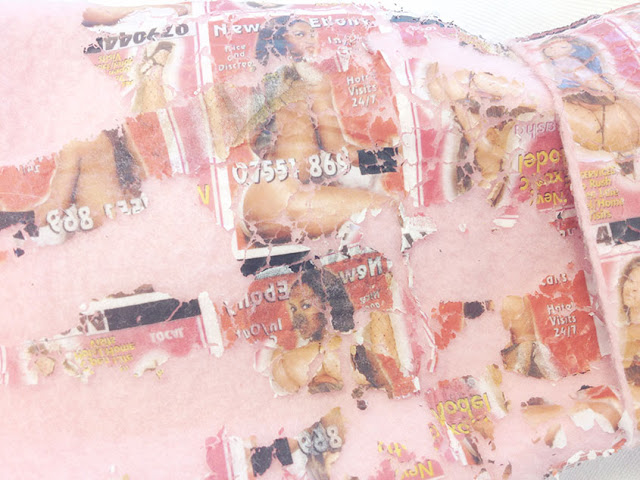 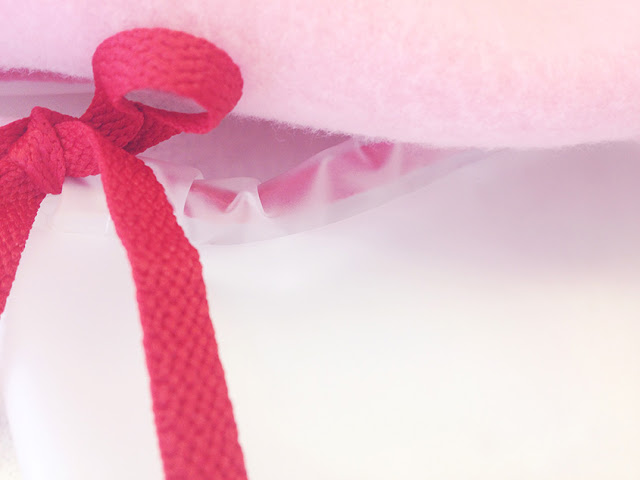 In the past three weeks I’ve reviewed collections where art and fashion have intersected each other. Art and fashion have once again converged in the graduate collections at LSAD. Franz Kline inspired graduate Bridget Murphy. Vincent van Gogh inspired Alanna McIntyre’s collection. Starry Night was the piece which Alanna solely focused her attention on. The painting is a symbol of manic euphoria, conveyed through circular forms and techniques like intricate bindings and gatherings. The collection displays van Gogh’s ability to conjure the pain of his tormented life into ecstatic beauty. Alanna trained in Dublin with Danielle Romeril and in London with Preen by Thornton Bregazzi. The designers modest hemlines and idiosyncrasies played a part in this beautiful two-tone (cornflour blue and yellow) collection. 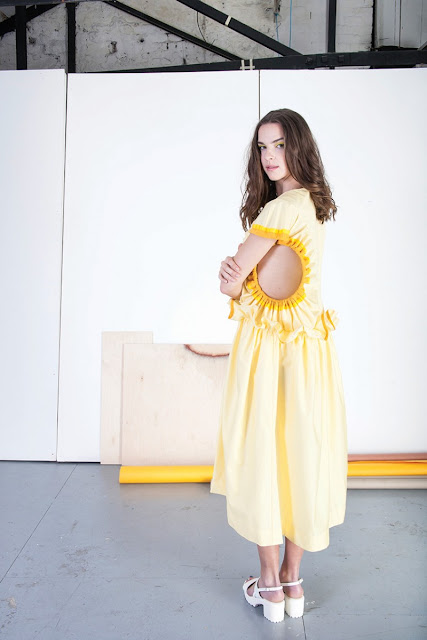 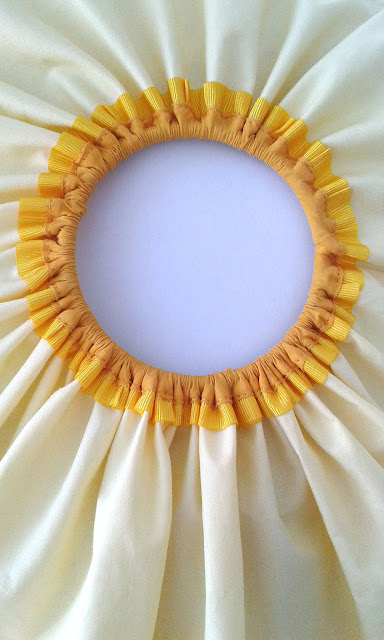 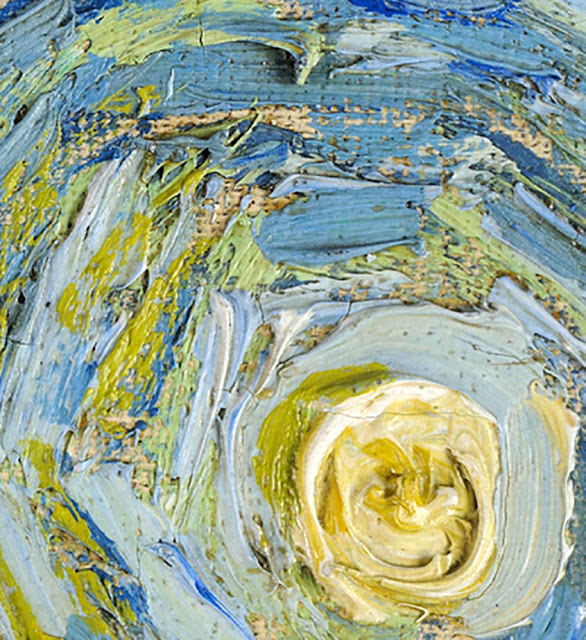