Resort 2016 is running concurrent to men’s fashion week. It is an excuse for designers to nab the attention of those attending the men’s shows to see their collections and also to have commercial items purchased for sale in January. Fall 2015 was one of the best seasons to date for almost all designers. Resort 2016 echoes that statement, with its consistently attention-grabbing and beautiful clothing. One label in particular which caught my eye - Whistles. 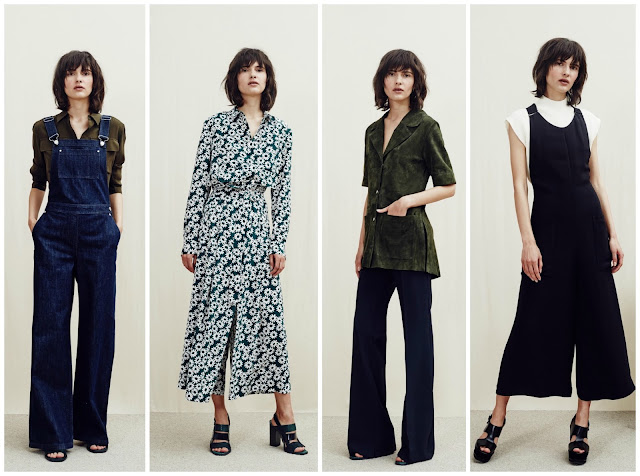 Whistles has 40 stores across Great Britain. It is the best high-end high-street, designer blend on the market. Its clothes are undeniably fabulous and wearable. For Resort, Jane Sheperdson decided to put her spin on the modern-day '70’s trend which has been present for the past few years. I like Whistles' clothing, for both men and women. This season however, I have to say, I was enamoured by the offering - more so than in the past. Honouring the inspiration; charming modern-day 70’s garb was shown in the lookbook. Flowy dresses, faux-fur coats, denim dungarees, and lots of suede.

Certain looks and items were outstanding. Look 6 would require some bravery but someone with sartorial genius could rock it no doubt. The green and black Scottish tartan high neck sweater with a midi-length skirt is a stunning number, but wouldn’t be considered the most wearable. The flared navy trousers and army-green suede low-lying neckline shirt combo was gorgeous. Look 19 was a navy jumpsuit with culotte trouser, paired with a white cap sleeved top.

The collection comprised of separates and dresses - when they hit stores next year they will go down a treat with the consumer. Their strongest collection yet, Whistles will most probably be showing their Spring 2016 collection during London Fashion Week or once again in lookbook form. Either which way, I am excited to see what they’ll have to offer.


Photo Credit: style.com
Collage: picmonkey.com
Posted by Paulidoodles at 6:30 AM

Email ThisBlogThis!Share to TwitterShare to FacebookShare to Pinterest
Labels: Whistles