March marked the one year anniversary of Nicolas Ghesquière at the helm of Louis Vuitton. In that space he presented six collections; four womenswear and two menswear. Fall 2014 (womenswear) was a revolutionary statement that brought us back to the 1970’s. As four collections passed, the idea grew tiresome. It lingered and it was time for a change. Much to my delight, Nicolas must’ve heard my prayers and presented us with the most directional offering yet. The runway was inside a slew of globular domes erected on the grounds of the Fondation Louis Vuitton in Paris’ 16th arrondissement. 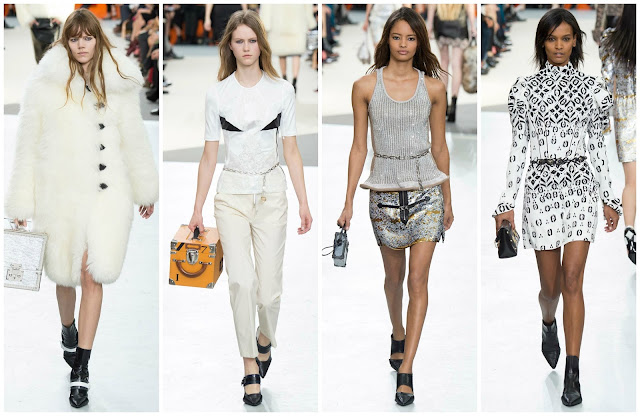 Freja Beha opened the show - carrying a treasure box - wearing an encasing white fur coat. The candy-floss-haired Fernanda Hin Lin Ly wore a similar, more refined coat, with a futuristic dress underneath - barely visible. Lineisy Montero also donned a striped, futuristic-inspired ensemble consisting of a top with a flared hem and sleeves and a delicate slash on the bodice. A matching skirt and stylish cowboy boots enhanced the look. More looks followed that represented the past, present and future - an exploration through the ages. However, the clothing was ageless. Playing commercialism to his advantage, a consumer of any age will be pleased by this collection and its modesty. Sex does sell. But fashionable clothing will always triumph.

According to the press release a fashion collection is a multi-dimensional journey, facetted by experiences both immediate and distant. Shreds of discoveries, recollections transformed by memory, imaginative anticipation. As pretentiously poetic as that sounds the collection - also a travel diary (an exploration through the intimacies of a wardrobe) - was all of the above. The collection conveyed a glimpse into the solemn past, fertile present and the inevitably dreamlike future. This collections was certainly solemn, fertile and dreamlike. I can attest to that.

Resort 2016 brought the brand to Palm Springs, California. Specifically, the futuristic estate - designed by architect John Lautner in 1973 - of Bob and Dolores Hope. The house (which can be purchased for $24,999,000) is “a symphony blending concrete, steel and glass, crowned by a curving copper roof”. Did I mention the indoor pool, the outdoor pool, the putting green, tennis court or large pond with a waterfall? With such an extravagant location, one could only imagine what Nicolas would conjure up. The product of the collection was his most exploratory and experimental to date. The Balenciaga-intuition had me mesmerised. 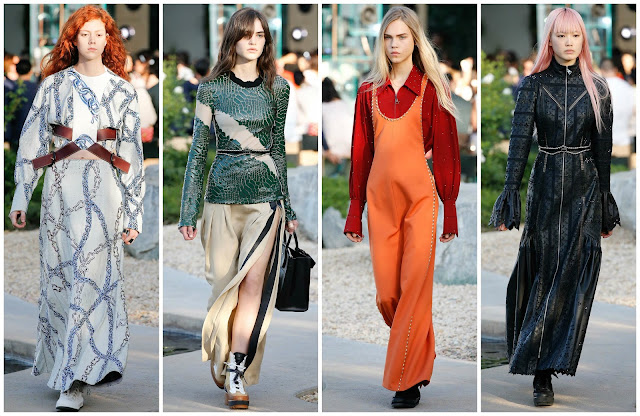 “The essence of glamour blends with an obscure desire for the gothic,” the press release read. The usual suspects - Mica Arganaraz, Natalie Westling, Fernanda Ly and Maartje Verhoef - donned the clothing which did blend an alluring soul with a mysterious, goth-searching fascination.  From the moment when Rianne van Rompaey marched around the mansion with headphones on before turning up the music and pounding the catwalk. Her top featured an orange grommeted criss-cross belt and a black panel. The flowing maxi-skirt was oddly styled with sneakers - appropriate footwear perhaps? As Nicole Phelps of Style.com noted, there was “a touch of the 1930’s Hollywood starlet to it”. A certain blue bomber jackets, fashioned with slits gave the funky and fashion-forward wearability necessary for the season. Look 22 was a bottle green long sleeve top with a ruffled neckline. A diagonal flesh coloured panel spiced up the look. A skirt, equipped with a thigh high split and a clunky boots, was styled with a bestselling bag. Suedes and fringe gave the bohemian-desert vibe. The colour palette consisted of pale and dark colours, and also rich, burnt hues. All of this added to the boho-luxe theme.

Resort was another successful season for Nicolas Ghesquière. It was directional, yet again, and had that personal touch that I missed in his first few collections. He infused something from his days at Balenciaga with him for Fall and Resort. Resort was futuristic take on bohemia and the result was enamouring. More collections like this will enrich Nicolas’  gleaming reign of LV.

Photo Credit: style.com
Collage: picmonkey.com
Posted by Paulidoodles at 6:30 AM