Black, white, grey and pink. Those are the only four colours Richard Nicoll used in his Spring 2014 show. With 'Frozen Warnings' by Nico playing in the background a wintery feeling was blustered across the venue. A few designers have done Fall-like collections for Spring.

Like Todd Lynn, I've been a big fan of Richard Nicoll for some time. At the time I only read Elle UK and was fascinated by his designs. They were cool. I loved the sheer white houndstooth print tops and shirts and also the gingham skirts. I loved the mixture of dark and light in Look 5. Look 8 and 10 are perfect for the red carpet. Ashley Madekwe would look great in his designs. 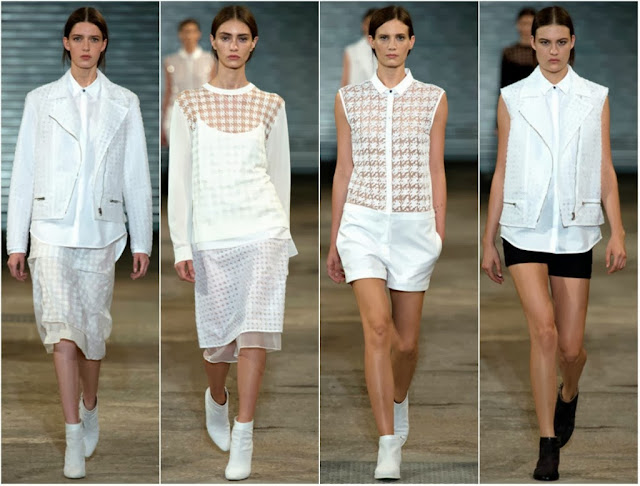 Sadly there was only three pink looks. The colour of the season has been featured in almost every designer presenting during London Fashion Week. Stripes were also used. They were shown in forms of skirts, dresses, vests and skirts and in colours of black and white, and black and silver.

White and grey aboce the ankle boots were donned by models who wore their hair in center-parted up-dos sitting behind their ears. Models wore minimal make-up.

Richard Nicoll is one of the many unpredictable designers. Hid designs in particular leave a lasting effect on me and I am so mesmerised I can't pinpoint what he'll do next season.

Photo Credit: freakdeluxe.co.uk
Posted by Paulidoodles at 6:20 PM No comments: 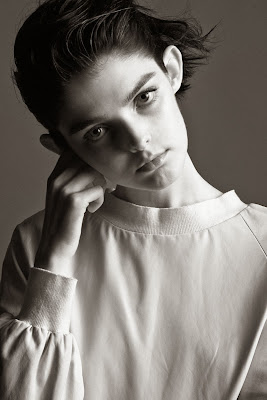 Laura O'Grady is an Irish model from Castleknock. A rapture of applause occurred when the 19-year-old walked in the Saint Laurent show during Paris Fashion Week. Select Model Management in London and Woman in Paris signed Laura. She has appeared 10 Magazine and UK ELLE. She is doing her thing and making her country proud while doing so. I wonder what the future holds for Laura.

Geoffrey J. Finch, head designer of Antipodium, presented at the Studio at Somerset House during London Fashion  Week this season. The Australian's Spring collection oozed sex appeal and the models looked stylishly undone. Might sound like a double negative but at the same time it isn't.

Models with messy hair and metallics strutted down the short black ad white runway with a devil may care mien which perfectly complemented the attitude of the collection. Sweaters are all the rage this season. Another trend to watch out for. We saw it at Fyodor Golan and Christopher Kane. Here at Antipodium they read 'Trés!'. 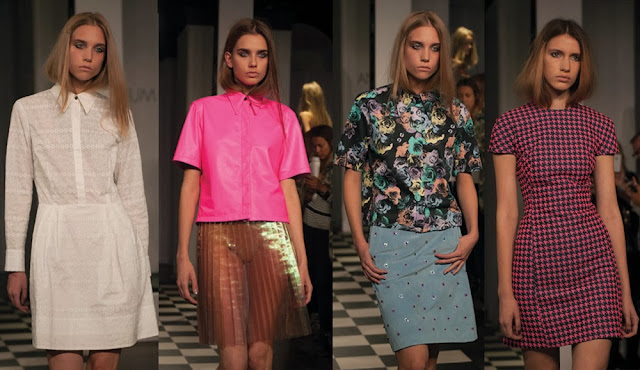 One model wore a pale blue high waisted skirt with a matching chunky buckle belt which was paired with a lacy white bra and silver metallic heeled sandals. I also liked the black and fuchsia checked jacket paired with a high waisted mint green skirt and a white crop top. A plunging neckline lilac top with metallic embroideries and a matching skirt was my favourite look of the collection.

I hope Antipodium is going to be presenting at the BFC Courtyard Space next season as like most designers I've talked about, they need a much bigger platform to present to.

Photo Credit: fashion156.com
Posted by Paulidoodles at 6:25 PM No comments: 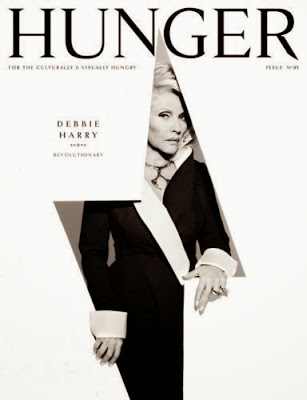 When amazing photographer, Rankin, is editor-in-chief of a cool and fun magazine don't you just squirm with excitement. I certainly did when I saw it. Hunger magazine is for the visually and culturally hunger. I am both visually and culturally hungry so I jumped at the chance. Rebel Wilson, Debbie Harry, Chiwetel Ejiofor, and Bryan Ferry are on the four covers,  respectively, for the fifth issue. I am a huge fan of all four, Blondie, Roxy Music, and two actors who will be absolutely everywhere soon. The fashion editorials in the magazine are sublime. Do check out this magazine and check out the website, hungertv.com. 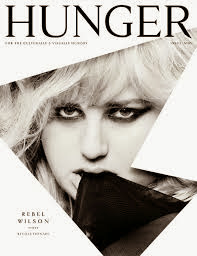 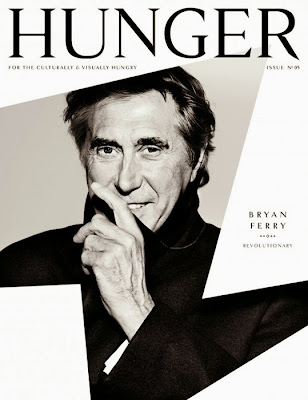 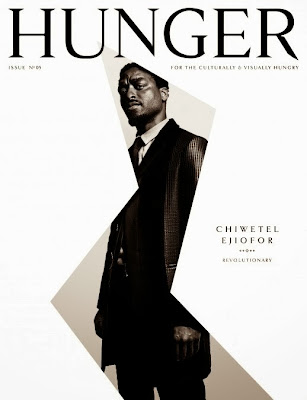 Photo Credit: hungertv.com
Posted by Paulidoodles at 1:30 AM No comments:

Last season I had the pleasure of attending the Todd Lynn show. I've been a fan of the Canadian born London based designer since his Fall 2009 collection. Each season he progressed as a designer and his collections got better and better. For Fall 2013 he really impressed me. It was one of his best shows to date. Then came Spring 2014 which has now surpassed its predecessor.

The Drury Club in Covent Garden is a private members club (opened in July 2013) and served as the venue for the show. The Todd Lynn girl is feminine with a very masculine rocker at heart. The latter has shone through this season. Look 6 for example was a black leather plunging neckline dress with silver zipper detailing. 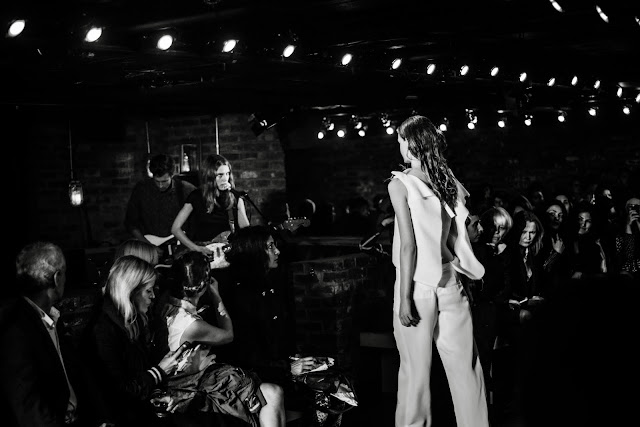 I quite liked Look 24 which was a clinical white coat with a sexy black cobweb lace high neck and cap sleeved top. The slinky silver column gown with a high neck was a perfect finale look and looked great on the statuesque model.

Todd Lynn is a forced to be reckoned with in the fashion world. I've been hooked on his designs. This season the rocker chick hit the runway evoking sophistication very nonchalantly. The Todd Lynn girl isn't one that gives a car but still effortfully oozes drama and edginess. I've been a fan for almost five years. Here's to another five.

Photo Credit: charlottepatmore.blogspot.com
Posted by Paulidoodles at 5:49 PM No comments: 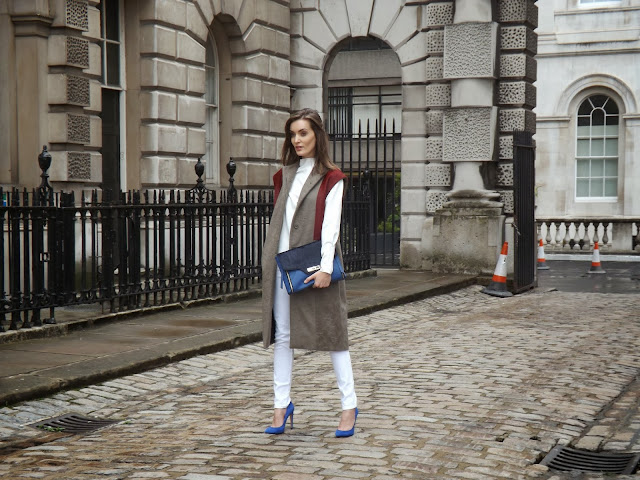 During London Fashion Week I had the fortune of meeting Anouska Proetta Brandon and taking what are my favourite photos from the week. In the above picture the Dublin-based blogger showcases her uber-chic style, oozing elegance and class.

Here's an excerpt taken from anouskaproettabrandon.com, her blog:   "AnouskaProettaBrandon.com was opened on the 26th of March 2011. What began as a simple place to share my personal style, my blog has evolved into a visual diary of my life through which I share my love of fashion & life through photography and film. With great attention to detail, my boyfriend Ronan takes most of the photos for the blog while I do most of the post-processing work. Together, I believe we make a great team and we have developed our own unique style over the last 2+ years of working together."


Brands I have collaborated with:  Dorothee Schumacher, GUESS, Intimissimi, Gap,  Marciano, Swarovski, Mango, Bershka, Dr. Martens, Kildare Village, Markberg Accessories, River Island, Vans and many more."
Head on over to her blog and check out her stunning photos and enjoy a Blog I Love.
Posted by Paulidoodles at 1:30 AM No comments:

Marios Schwab is one of my favourite designers. His past two collections have been his best work to date. This season wasn't his best but was extremely good. Regent's Park was where the Topshop Show Space was this season. Marios' designs were strutted down the white runway with grass at the side. How whimsical.

The collection was trés chic. Every season the Greco-Austrian features sheer looks with embellishments. Last season it was a devilishly haunting moment when the beautiful ghost like gown glided down the runway. This season those looks were turned into fun ankle length dress with less drama and more playfulness.

Spray paint and airbrushing effects were used to give the illusion of curves, look 1 was the first and prime example of that. Look 27 was my favourite look. The cream 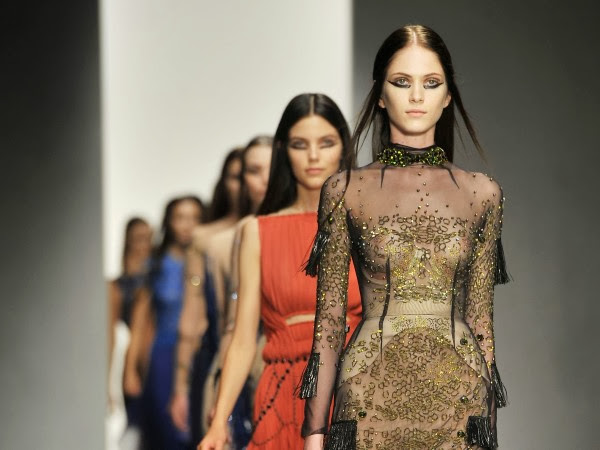 sheer high neck long sleeve dress with intricate detailing of black spray paint in different areas which strangely reminded me of a seismometer.

The finale looks came in eight forms. The first was a black lace long sleeve gown with a seismometer-reading-esqe print, which was followed by a white gown with an illusion panel and blue detailing and a black party dress with an elaborate necklace halter. A similar white gown took the runway, then a Grecian inspired rusty red coloured gown, a white gown and the finale rusty red silk chiffon floaty gown.

Another stupendous collection from Schwab. Every season he manages to keep it interesting while also referencing his previous collections and featuring similar designs.

Photo Credit: howzit.msn.com
Posted by Paulidoodles at 5:48 PM No comments:

I gasped when I saw the pictures from the Erdem show on Monday morning during London Fashion Week. My initial reaction was; 'well the Erdem girl has a rocker boyfriend'. The Erdem girl also is more confident and is oozing sex appeal. I was stunned by the shock to system. At the same time it was refreshing (and liberating for the Erdem girl).

The gorgeous white jacket (with double breast pockets) and side split skirt opened the show. The second look had the side split skirt and was black. The model looked ultra chic, rocking blacked out frames and a cut out jacket. The show progressed into the expected floral looks. 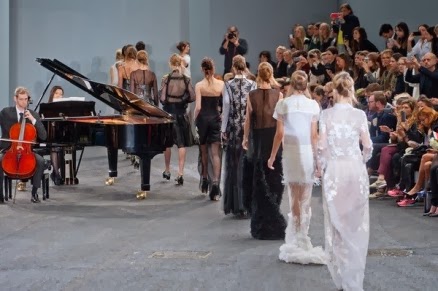 Erdem is the designer known for floral craze but this season his colour palette was a muted and plain black and white. Very autumnal hues but the materials used were airy which gave the summery feel. Look 13 was a hit in my books. A single white feather embroidered onto a square printed black sleeveless dress.

My heart may have skipped a beat when the final look came out. It was astoundingly pretty. A crisp white short sleeve shirt gown with a pointy collar, a feather embroidered and sheer skirt bursting into a white plume. It was... I just adored that look.

Black platform sandals were worn by models. Blacked our sunglasses were also worn. Throw prim and proper out in the London rain because models wore a thin line of kohl around their eyes and their hair was done in messy up-dos.

A rocker chic collection from the designer I'd least expect it from is the best thing ever. A fashion week gift one might say. Erdem is, has always and will always be one of my favourite designers.

Photo Credit: fashionsoundtrack.com
Posted by Paulidoodles at 5:45 PM No comments:

African tribal music mixed with pop was bleared at the Christopher Raeburn on Friday the 13th. For a supposed unlucky day the fashion world prospered and presented hour after hour, amazing collections. Christopher was inspired by the African desert this season which can so clearly be seen in his designs. 'Mirage' it was entitled. The collection despite being so dreamy wasn't a mirage but instead a fast paced stylish show. The utilitarian is a trend that was picked up at New York Fashion Week and has carried through to London. Christopher's chic and sharply tailored clothes all were worn with sophistication and ease by beautiful models.

I'm always fascinated by the materials that the Royal College of Art MA graduate uses. I was fascinated last season seeing the clothes up close. The parka is his trademark piece and was used in this collection  in a matte like material. Look 9 was a nude baggy long sleeve dress with netted sleeves.

The seasons favourite colour pink was used with white in a gorgeous print. Look 28 was a beautiful print of trees. Sounds uninteresting but fared perfectly. 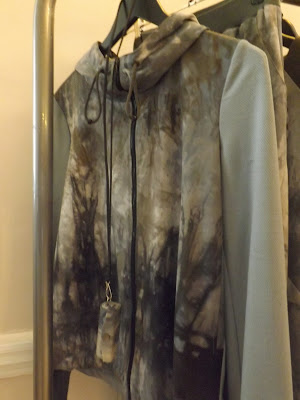 London has delivered this season. It's been much better and more memorable than New York and the new faces are finally getting the more attention they deserve. Raeburn is one of them. He showed on presentation for the past few years but has finally hit the big stage and had a perfect collection for it.

Photo Credit: My Own
Posted by Paulidoodles at 4:30 PM No comments: