Jackie Lee known under the pseudonym of J JS Lee presented her Spring 2014 collection during London Fashion Week at Somerset House. The BFC NEWGEN winner sponsored by Topshop is a fan of gloomy and rainy days, perfect for the weather of LFW. Her show on the contrary was far from gloomy.

Jackie was born in Seoul, South Korea and is based in London. She has seven years of pattern cutting experience and graduated with an MA in Womenswear from Central Saint Martins in London. Topshop have even had the designer create a special notebook for sale in the NEWGEN area of Somerset House where you pick a cover and a colour inside, and they bind it together for you. 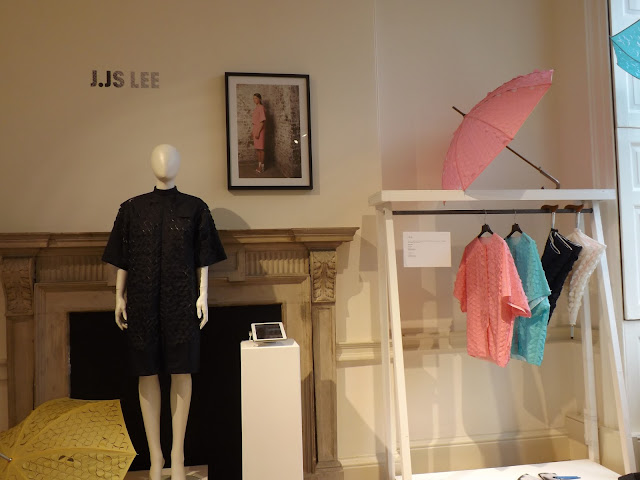 Think pink. And also according to the press release under the sea, this is the second show of LFW to use aquatic references after Felder Felder. A jellyfish which inspired Jackie was holographically projected onto the walls of the BFC Courtyard Space. The opening look was a pink top with a pointy collar and oversized sleeves paired with a pencil skirt and ankle strap sandals.

Impeccable tailoring provided an elegant touch to the somewhat edgy clothing that hit the white runway. Blacks, whites and pinks were all used in the collection. Even though black is associated with melancholiness and gloominess it still had a summer feeling to it.

A great collection. The rising star is one to keep a close eye on and it'll be great to see how the South Korean evolves next season for Fall.
Photo Credit: Sanguine Style
Posted by Paulidoodles at 5:30 PM